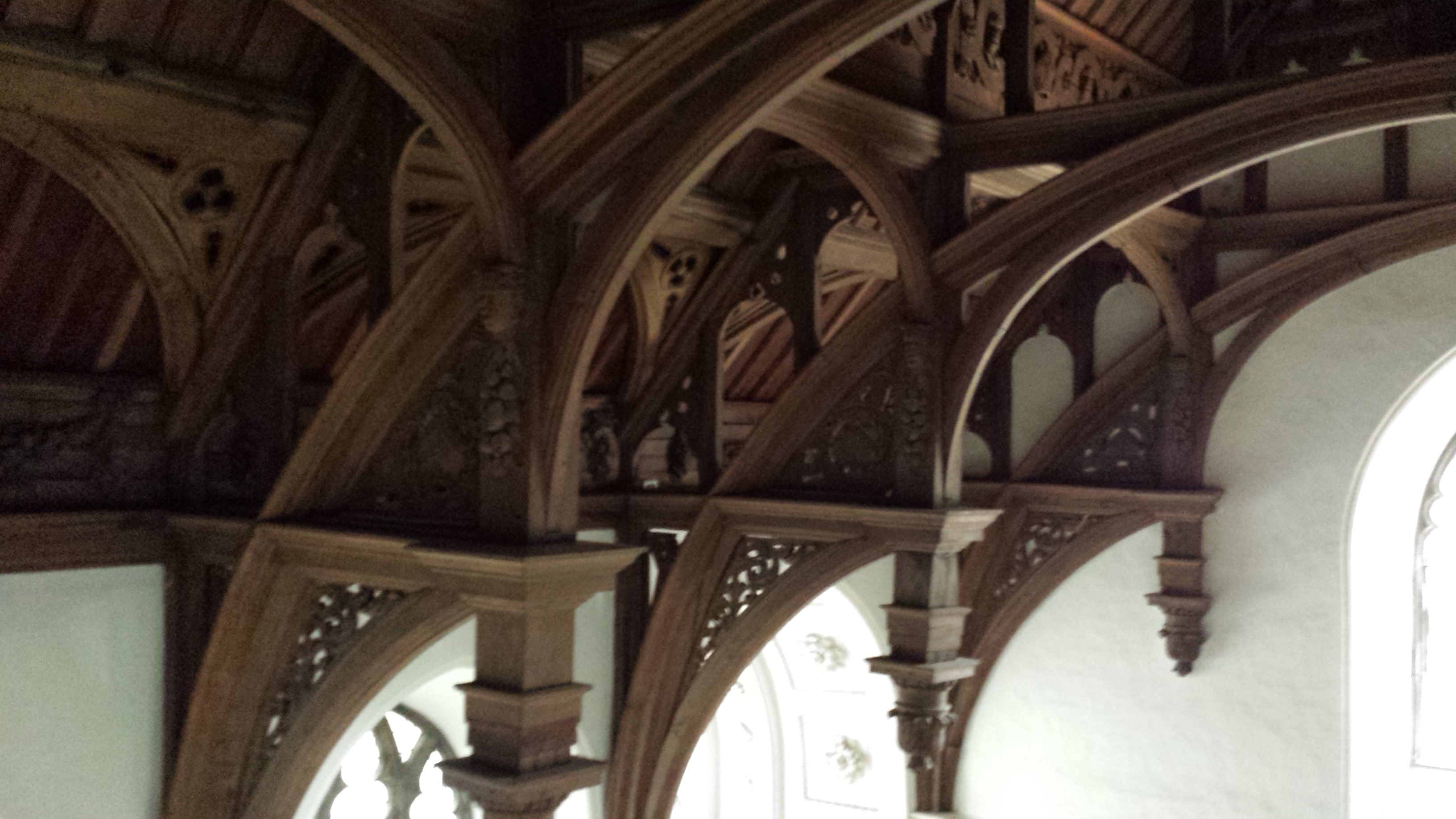 History of the Great Hall

The original Great Hall, built in the 16th century was ransacked by Cromwellian troops during the Civil War. The Parliamentarian Colonel Scot ordered the demolition of the building following the English Civil War and the more valuable materials were sold off at auction. Many other buildings in addition to the Hall were destroyed. WILLIAM JUXON was promoted to the See of Canterbury in 1660, after it had remained vacant during the Commonwealth period.  He attended Charles I on the scaffold during his execution. After the Restoration it was completely rebuilt by Archbishop William Juxon on the site of the original hall c.1663. His coat of arms (Or, a cross, gules, between four blackamoors heads, couped at the shoulders, proper; impaled with the See of Canterbury) features of the weathervane which surmounts the roof of the Great Hall. Juxon ordered that the new Great Hall was to resemble the original hall as closely as possible, despite advice to the contrary, ……..‘nor could all the persuasions of men versed in literature, and all his friends, induce him to rebuild it in the modern way, and unit it with the library, though it would cost him less money’

Luxon spent £10,500 on the building which was constructed with a late Gothic style hammer beam roof, the like of which had not been constructed for a hundred years. The sophisticated classical style Italian Doorway fitted on the east end of the south wall does not relate to the rest of the architecture of the rest of the room, inviting comment that the design evolved as work proceeded. The Great Hall was originally constructed with a dais at the east end and a Screen and a Screen’s Passage. 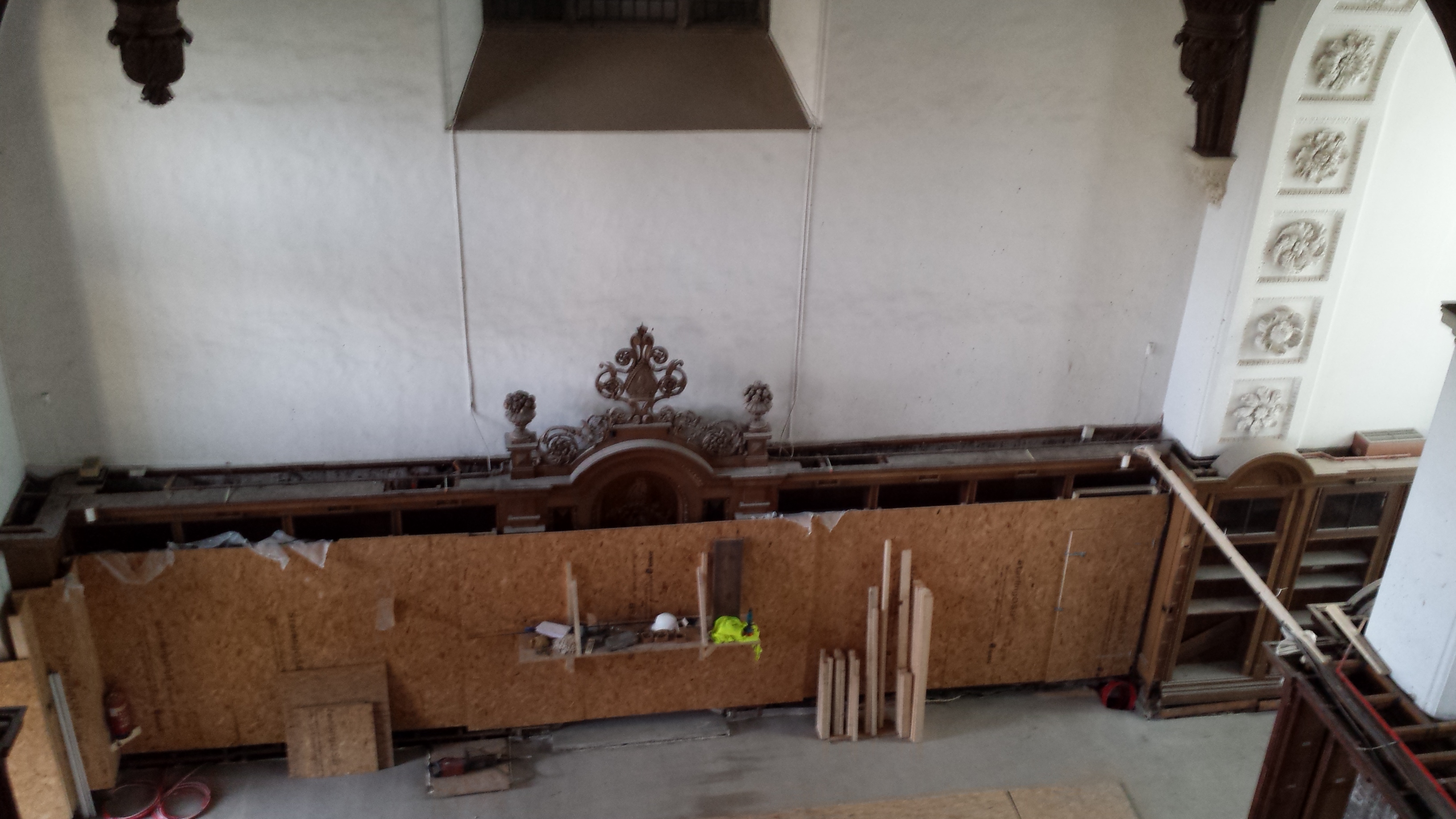 Writing in his diary in 1665, Samuel Pepys described a visit to see “Bishop Juxon’s new old-fashioned hall”. Juxon demanded the return of extensive collection of books removed from Lambeth during the Commonwealth period. John Evelyn, in a letter to Samuel Pepys dated 1689, comments that ‘(Lambeth library) replenished with excellent books, but that it ebbs and flows like the Thames running by it at every prelates accession or translation.’

The room was altered during the 18th century. By the beginning of the 19th century the western end of the hall had been altered and the Screen and first floor rooms had been removed. The Great Hall was altered during the 19th century when it was configured for use as a library with the addition of projecting book shelves on the north and south walls. This alteration was directed by the architect Edward Blore. Blore’s alterations were discussed in The Gentleman’s Magazine (Volume 156-157, 1834, pp. 152-154). The hall is described as being, ‘wainscotted to a considerable height’. The room was heated by under floor pipes and two fireplaces installed at the east and west ends. The entrance to the courtyard in S/W corner was converted into a bay window. The roof suffered bomb damage during WWII and the building was altered during the 1950s.

The exterior and interior of the Cupola was originally decorated in a white coloured oil paint applied over a red primer which was tinted with red lead. The wooden structure was intended to look like carved white stone/marble.

The interior has been stripped of early paint layers – probably during post WWII renovations.

The brick walls were originally plastered in horse-hair plaster. Traces of a translucent green/grey containing coarsely pigment particles were found on the surface of the plaster. This paint probably dates from the 17th century. 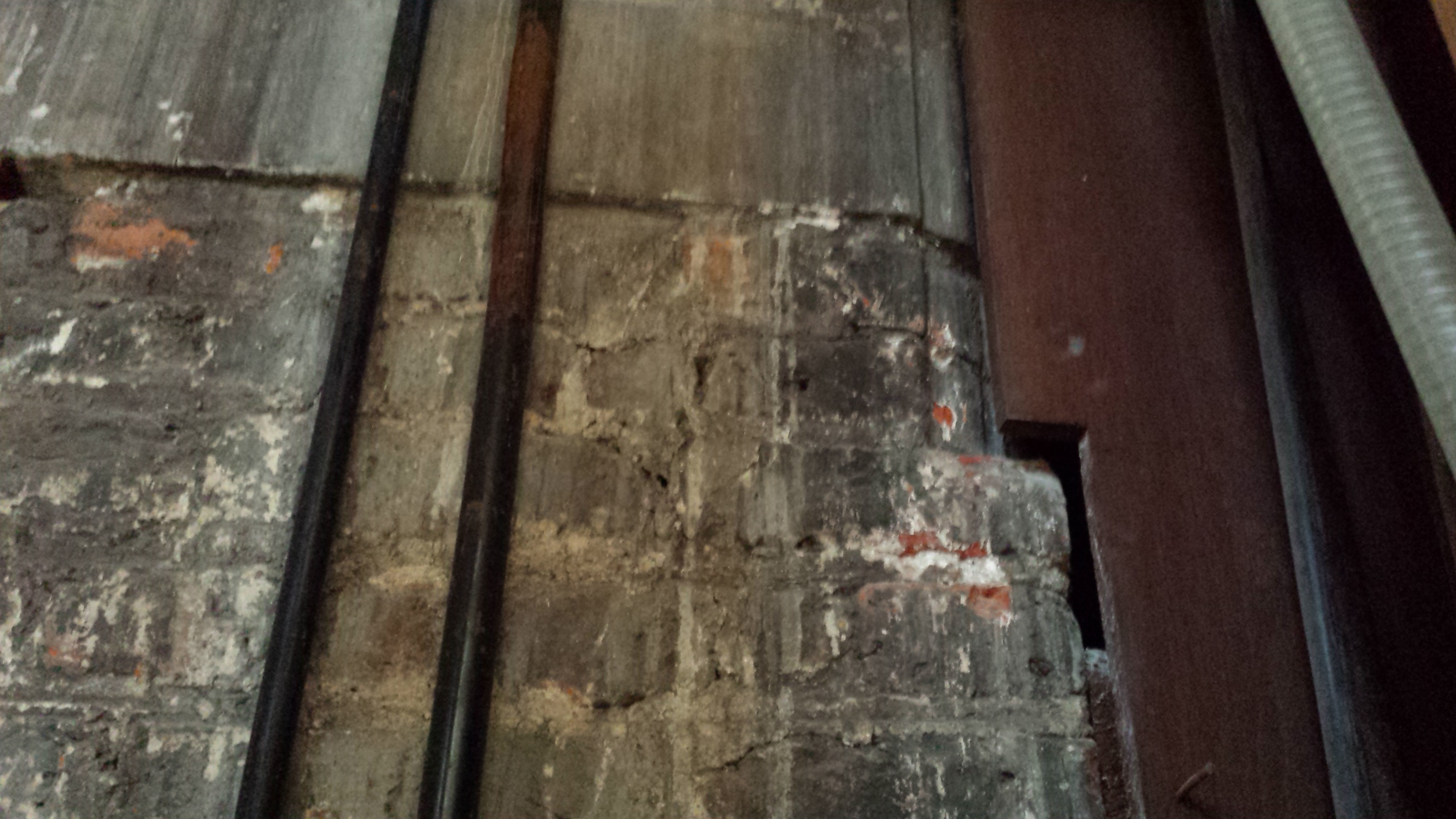 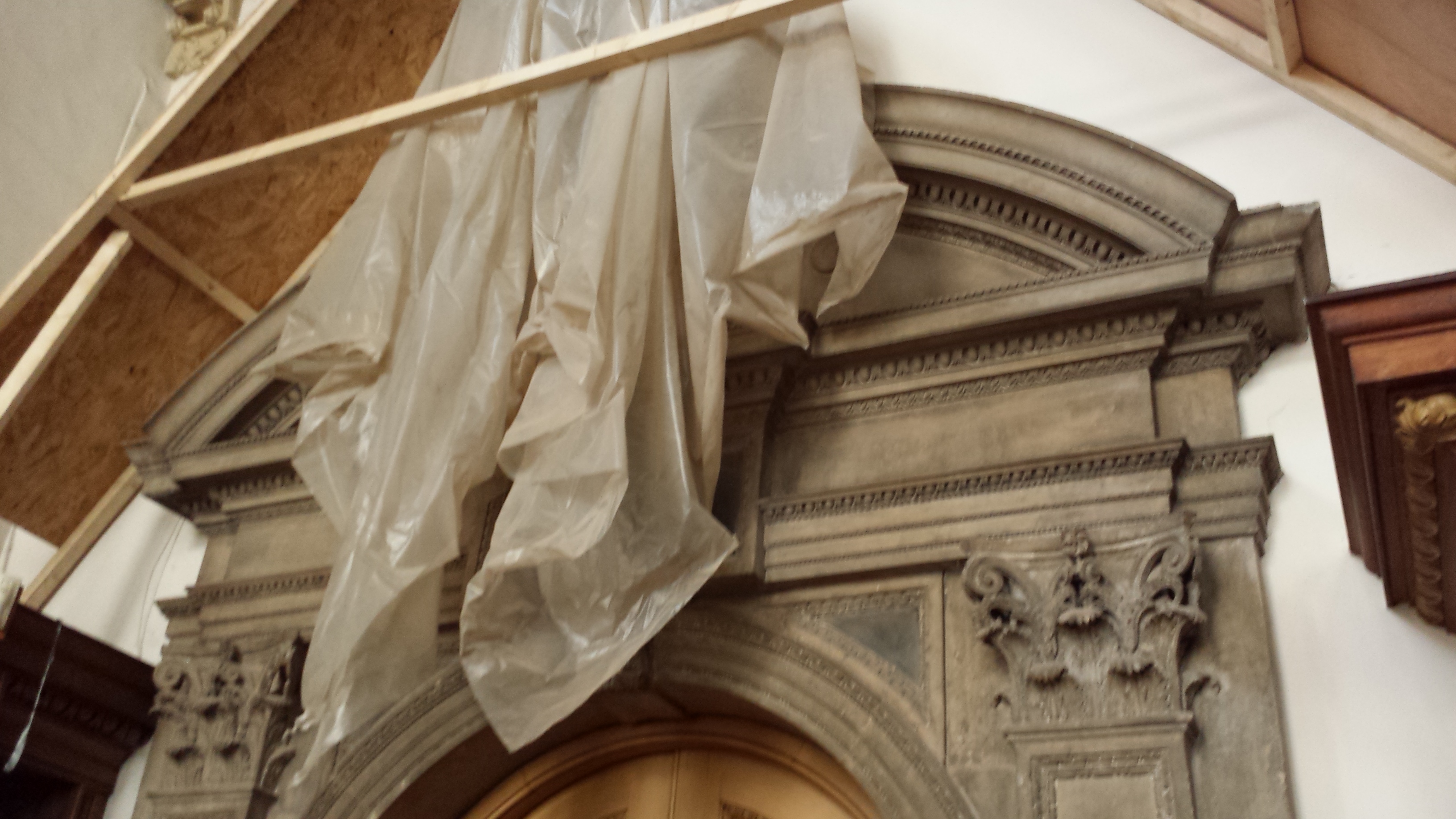 The junction between the moulding of the window reveal architrave and the brick wall had been fitted with shaped bricks. Trace of horse hair-plaster and early paint was found in this area. No access was available to remove samples from the moulded areas. 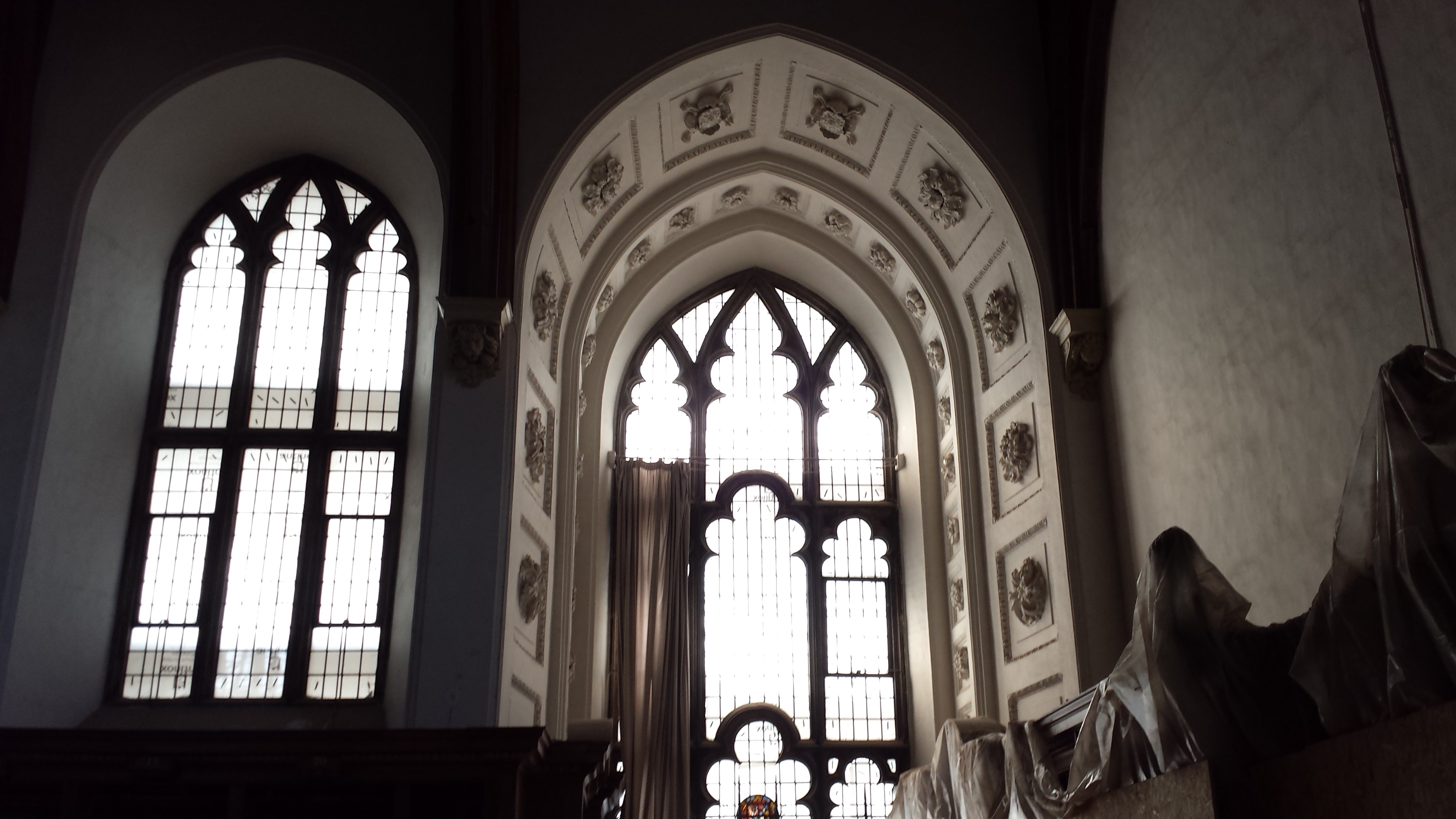