COMBERMERE ABBEY – LIBRARY
A Survey of the Structural and Decorative Development 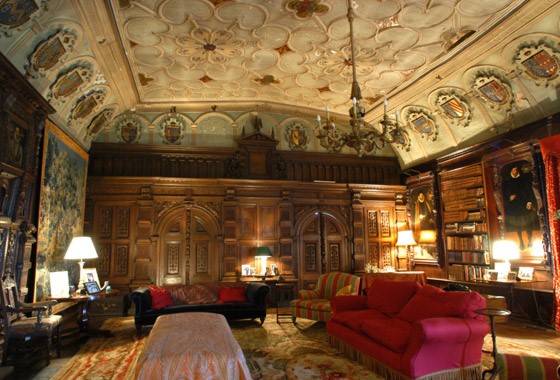 Introduction – Combermere Abbey & the Great Hall/Library
The present Combermere Abbey is a Grade I listed building and is one of Cheshire’s most notable historic properties. The original Cistercian Abbey was founded in the twelfth century, medieval in parts and seventeenth century in others, it was enclosed within a Gothick ‘envelope’ in the early nineteenth century.
Sixteenth Century
The Cistercian monastery was dissolved in July 1538 and the church and monastic buildings, with the exception of the Abbot’s House, were demolished. The estate was granted to Sir George Cotton who built a new building on the site in 1563 which incorporated the remains of the Abbot’s House. The Abbot’s House can be dated to 1503, and its fine Refectory/Great Hall – now called the Library – located on the first floor. This room was built over a range of the monastic cloister. It has a timber framed structure and originally would have had an open fire in the centre of the floor. The room retains its original late fifteenth century oak dias canopy at the top end of the room (North). This is probably the most significant feature of the room – very few dias canopies survive. The canopy would have projected over the Abbot’s high table which may have been placed on slightly raised on a dias.

The original hammer beam roof (dated by dendrochronology to c.1500), is still in place, retained above the existing plaster ceiling (a later insertion c.1600). As part of the post-reformation rebuilding works of 1563 carried out by Sir George Cotton, a new stone flue and wide fireplace was created on the east wall within the existing timber framed structure. The new late 16c fireplace opening was fitted with an ornately carved oak fire surround and overmantle (comment on heraldry, portraits and dates). (Also comment on the treatment of south wall and the insertion of the screen)

By 1727 the external cloister arcading on the ground floor has been filled in.
Early Nineteenth Century
The house was altered and extended between 1814 and 1820 by the diplomat and military leader sir Stapelton Cotton later 1st Viscount Combermere) The whole building was remodelled in the Gothick Style. In 1820 a ballroom was built to entertain the Duke of Wellington. There are no records of the works carried out within the Library at this time.

Late Nineteenth Century
Later in the 19th century (c.1860) the room was redecorated and the fire opening was reduced in size.

The ceiling retains the decorative scheme applied at this time. The terra-cotta cartouches were fitted to the cove bed. The existing painted decoration of the ceiling is thought to date from this period of alterations. These decorations were certainly in place by 1881 when the Empress of Austria rented Combermere Abbey. Her visit was recorded in a series of engravings. These and the famous ‘ghost’ photograph taken in the Library in 1891 by Sybell Corbet in 1891 records the shelving which lined the room.

Early Twentieth Century
In 1919, the estate, was bought by Sir Kenneth Crossley. He sold the books and removed the shelving. The existing panelling on the North & East walls was erected in the 1930s. In 1992, his great-granddaughter, Sarah Callander Beckett inherited the estate, and now lives in the Abbey with her family. In 2011

Recent Works to the Library
Recent restoration work was necessitated by the near collapse of the Eastern wall of the Library The work, assisted by a grant from English Heritage, repaired the essential structure of the Library. The repair works uncovered substantial remains of the early sixteenth century timber framing and substantial traces of colourful decorative finishes behind the panelling in the Library, as well as the remains of the earlier 17th century stone fireplace opening. The paintings in the medieval panelling have been restored, thanks in part to a grant from the Heritage Conservation Trust. 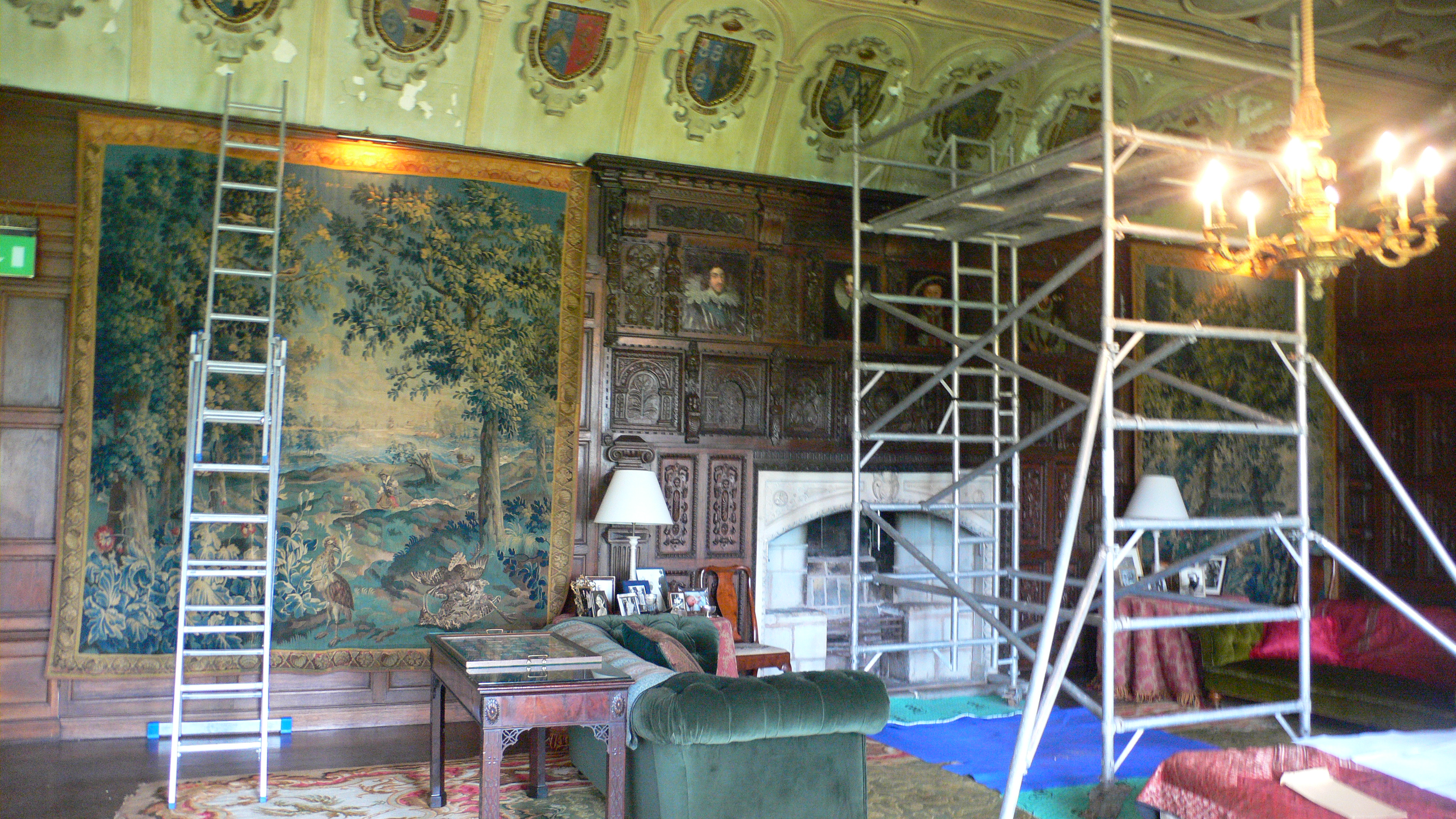 Research Brief
The aim of the current research project is two-fold.

1. Historic Interiors Research
The various architectural elements and decorative finishes within the Library require further investigation to clarify their dates, methods and materials of construction, and to ascertain their condition.
The early sixteenth century dais canopy is divided into compartments beds and may originally have been ornately decorated or decorated with heraldry relating to the monastery. This is a possibility given that heraldic shields were cut into the arch braces of the hammer beam trusses. The surface of the painted decoration of the dias may retain evidence of smoke blackening from the early central fire. All of the existing heraldic devices on the canopy are post-reformation. The current decorative scheme is thought to have been applied during the last half of the 19th century. The recently discovered section of c.1503 timber frame at the lower (south) end of the hall bears traces of a bold brightly coloured decorative scheme. It is likely that the high status end of the room would have been even more elaborately decorated.
The existing painted decorative scheme on the ceiling is assumed to date from the late 19th century (c. 1860). However it is possible that the plaster ceiling may retain traces of early c.1600 paint schemes. The present decoration is an attempt to reproduce an earlier scheme. But it seems more probable that c.1600 the ceiling was much more simply decorated in white distemper – the standard decorative finish for ceilings at this period – with some of the heraldic motifs picked out in colour. The investigation of the Library will require examination of the heraldry – which is an important clue to the identification and dating of successive alterations.

2. Flaking Paint – Investigation of cause
The accumulated layers paint on the ceiling and cove are very unstable in various areas – with large areas of loss and incipient flaking. This may be due in part to the movement of the substrate but is more likely to be caused by a loss of adhesion between paint layers or the paint layers and the substrate. The paint investigation will seek to establish the causes of the present deterioration and offer options for treatment and the conservation/re-presentation of the Library.

Structure of the Report

• One of the aims of the current research is to identify the decoration of the room during each of these successive phases. These will be plotted on the development chart for future reference for the management and presentation of the history of the room.

• The report will present a chronology of the structural and decorative history of each of these phases noting comparative examples and comment on the value and significance the surviving features.

• A subjective assessment of values and significance will assist the evaluation of conservation and presentation options and facilitate the decision making processes.

• The report will offer options for the conservation and representation of the Library which may then be used for the formulation of more detailed works specifications and pricing for the next phase of works to the room.

Decorative Options
The on-site investigation and examination of the paint samples under high magnification has established the decorative history of the Library . (See Structural Development and Decoration Chart). This information will inform decisions about the future presentation of the Library.
The existing decoration appears to retain elements of the decoration applied c.1860 – Phase 5. The plaster ceiling was original decorated in plain white distemper. The elaboration of the ceiling, picked out elements in light tints began c.1814.
Around 1860 the appearance of the Library was radically altered with the introduction of graining to the cove – probably intended to match the wooden bookcases. At this time the the cove was embellished with a series of cartouches bearing the arms of the Cotten family. The dias canopy was fitted with heraldic badges. The ornate heraldry on the ceiling bed has been painted on fine canvas and then stuck to the ceiling bed.
This scheme has been altered by:
• The over-painting of sections of the ceiling decoration
• The removal of the bookcases
• The repainting of the grained cover and dias canopy in a light green
• The insertion of sections of panelling c.1930

Flaking Paint Problem
The current research suggests that the wide-spread flaking paint is caused by two factors;
• The heavy build-up of distemper decorations from c.1600 to pre-1814 is a weak bond. The later layers of oil paint applied over these readily soluble layers will always be a problem if not removed.

• Recent damp problems have made the distemper decorations soluble and prone to mould growth. The black mould is visible within the lower layers of the distemper paint and on the surface of the ceiling and cove plaster

Removal or retention of existing paint?

Discussion Points
• Fixing the paint may be very expensive
• It may be difficult to kill mould if paint is left on ceiling
• The build-up of distemper may cause problems in the future
• It will be possible to recreate the simple lined c.1860 decoration

Discussion Points
• Historic accuracy of distemper decoration of a c.1600 ceiling
• Material value of the existing scheme
• The c.1860 Cartouches and badges survive in situ
• Evidence of 1881 engraving of the Library
• Recreation of late 19c graining?
• Importance of 1930s fittings