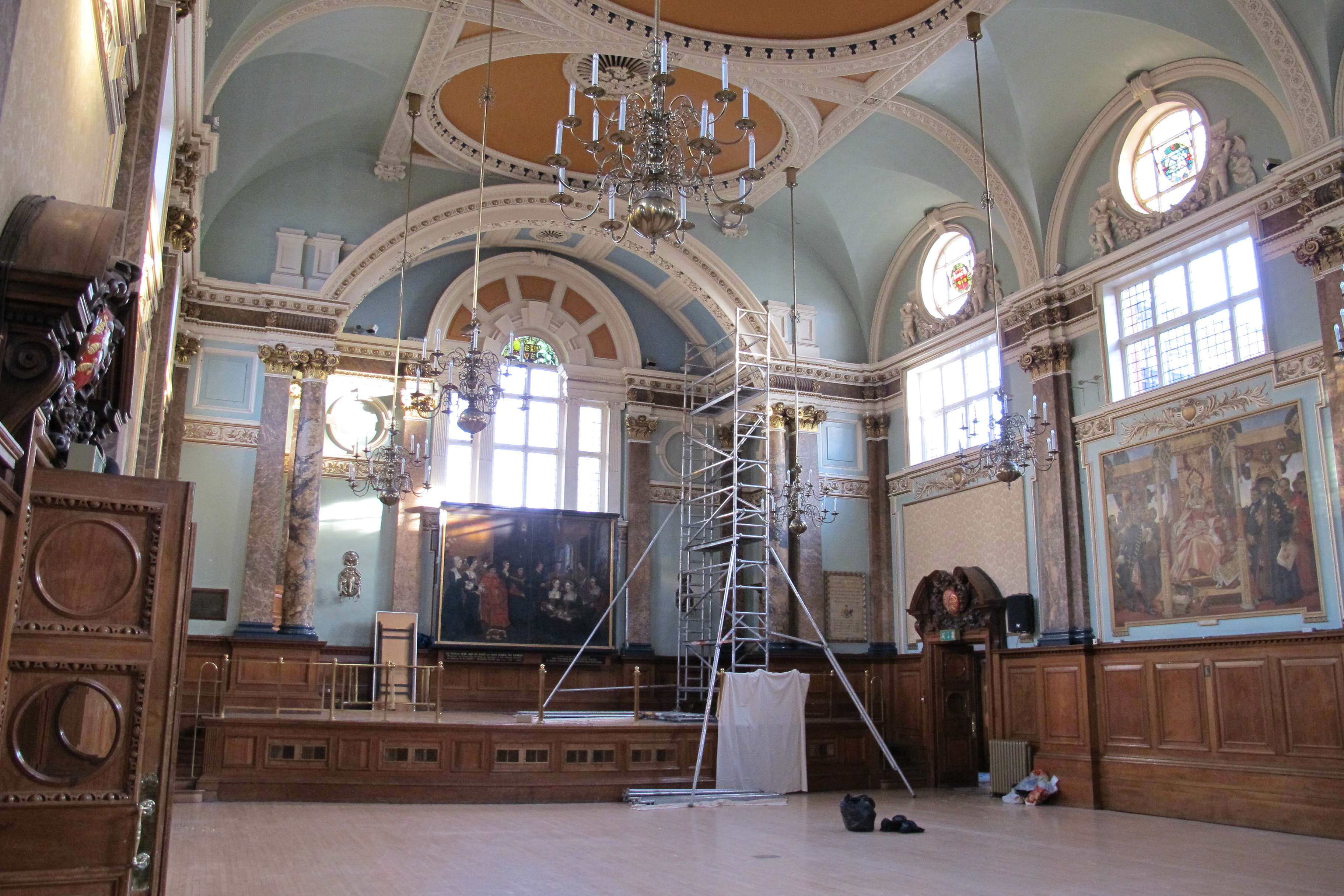 Research is required to establish the decorative history of the four areas listed below, to inform their future conservation and representation.

A sampling strategy was established for each room using documentary evidence (historic images, building accounts, contemporary descriptions) and on-site investigation. A series of paint samples was removed from representative elements of each room. The removed samples were mounted in cross-section and examined at high magnification (x50 – x500) under normal and ultraviolet illumination. This examination established the stratigraphy of all the decorations applied to each element. It was then possible to suggest the appearance of original decoration of the rooms and comment on all later decorative schemes, where possible, correlating the paint layers with existing photographic and documentary evidence.  Initial findings were presented as a Power Point presentation to the project team for discussion before this final report was drafted

The Vestry Hall was built c.1886 to the designs of John McKean. The interior is richly decorated with marble pilasters, ornate decorative mouldings, and hardwood panelling. In 1912 the walls are decorated with four inset canvas paintings illustrating Chelsea’s association with the Arts, Literature and History. To date no records have been found which provide details of the original or later decoration of the interiors, apart from a photograph of the Main Hall of c. 1948. The existing decorative scheme is thought to date from the late 1970s on stylistic evidence.

The current blue decoration is in a modern acrylic paint. Since after WWII the ceiling bed has been painted, but before this time the ceiling bed and ceiling mouldings were painted in a tinted distemper. All the original early distemper decorations have been removed. Distemper (a mixture of glue size and chalk) is readily removed with brushes and hot water, and it was common practice to removed distemper decorations before applying oil paints.

Ceiling Moulding – Samples removed from the moulded elements of the ceiling retain traces of the original tinted distemper – this had been repeated several times. It is assumed that all the ceiling beds and mouldings above the cornice would have been decorated in distemper finishes.

Decoration of Main Ceiling & Cove – Off White Distemper Based on the substantial traces of off-white distemper found on the samples removed from the ceiling panels and plain mouldings of the ceiling arch of the stage (and the ceilings of the Small Hall and Cadogan Room – See below) it is suggested that the beds of the ceiling and cove of the main ceiling were also decorated in a tinted off-white distemper.  It is suggested that during the late 19th and early 20th centuries the ornate mouldings and wall faces may also have been finished in a tinted off-white distemper. This is a normal Victorian decorative convention. All the elements on the frieze and on the wall faces below were originally finished in oil paint.

Plaster Cornice & Decorative plaster – Oil Paint Decorations Examination of samples removed from the cornice and ornate moulding reveal that these elements were originally painted in a Plain Cream (no gold) coloured oil paint. This decoration was applied over a layer of red lead priming and a light blue undercoat. There is layer of surface dirt on the surface of the Plain Cream oil paint. Later (probably c.1900) the cornice was redecorated in a similar Plain Cream 2 (no gold) coloured oil paint. Later still the cornice moulding was repainted in a Pale Sage Green coloured oil paint and some elements were decorated in gold leaf. This paint contains zinc which is indicative of a paint applied between c.1920 sometime before WWII. All later paints are modern alkyd resins (only widely available after WWII) probably first decorated in the 1960s as part of the post-WWII renovations. 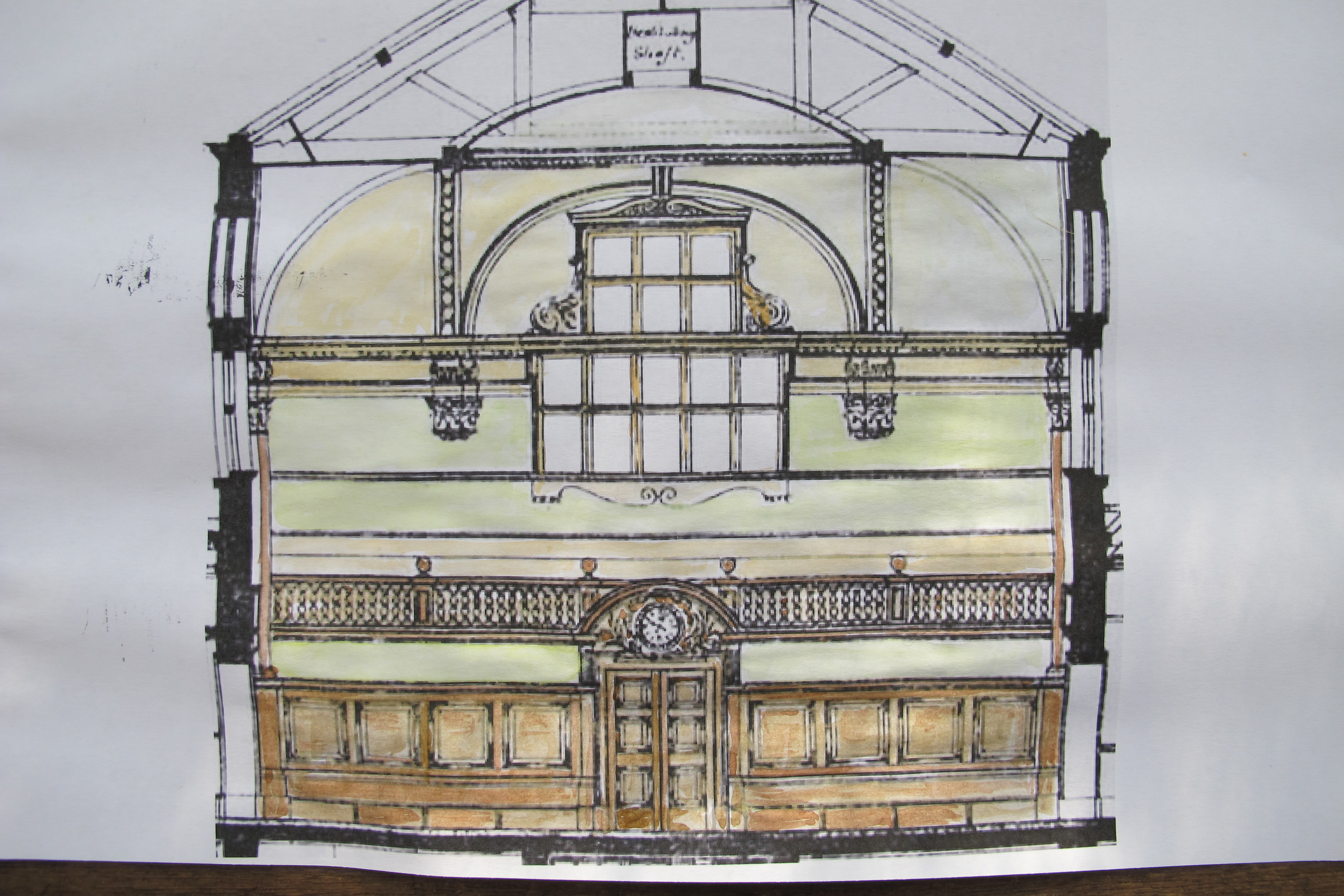 The research findings helped clarify the original decoration in each of the four areas – and the importance of hardwood or softwood grained to imitate a hardwood in the decorative schemes from 1886 – c.1920. An understanding of the cost of the original fixtures and fittings has established the hierarchy of the four rooms

The recreation of the original painted decoration in the Main Hall using appropriate modern paint system – removing the bright whites, modern blues and strong orange from the colour palette and painting the ceiling in a tinted broken white – will probably greatly enhance the architectural quality of the room. However the painted marbling on the frieze dates from c.1920 and it of very high quality. A decision will need to be made about its value and whether it should be retained and incorporated into the new decorative scheme. The first two decorations were not gilded. The existing gilding is not gold leaf but gold paint.

The distinctive use of greens and dark greens used for the original decoration of the Small Hall may not be appropriate for current use. This room is let out for art exhibitions and weddings and a dark scheme may not prove popular with prospective customers. The recreation of the original graining on the joinery should be considered as it is part of the decorative tradition of the building – and it would provide a sense of grandeur and unity with the Great Hall and the adjacent passages (extensive areas of hardwood and graining in these areas).

The original decoration of the Cadogan Room was more restrained with Dark Graining and Cream coloured walls. It is recommended that the painting is retained and the new scheme is developed to enhance its appearance.

The decoration of the Anti-Room has always been related to that applied to the Cadogan Room – at times its wall faces have been treated in darker paint colours. Any new scheme should account for the historic decorative relationship between these two rooms.