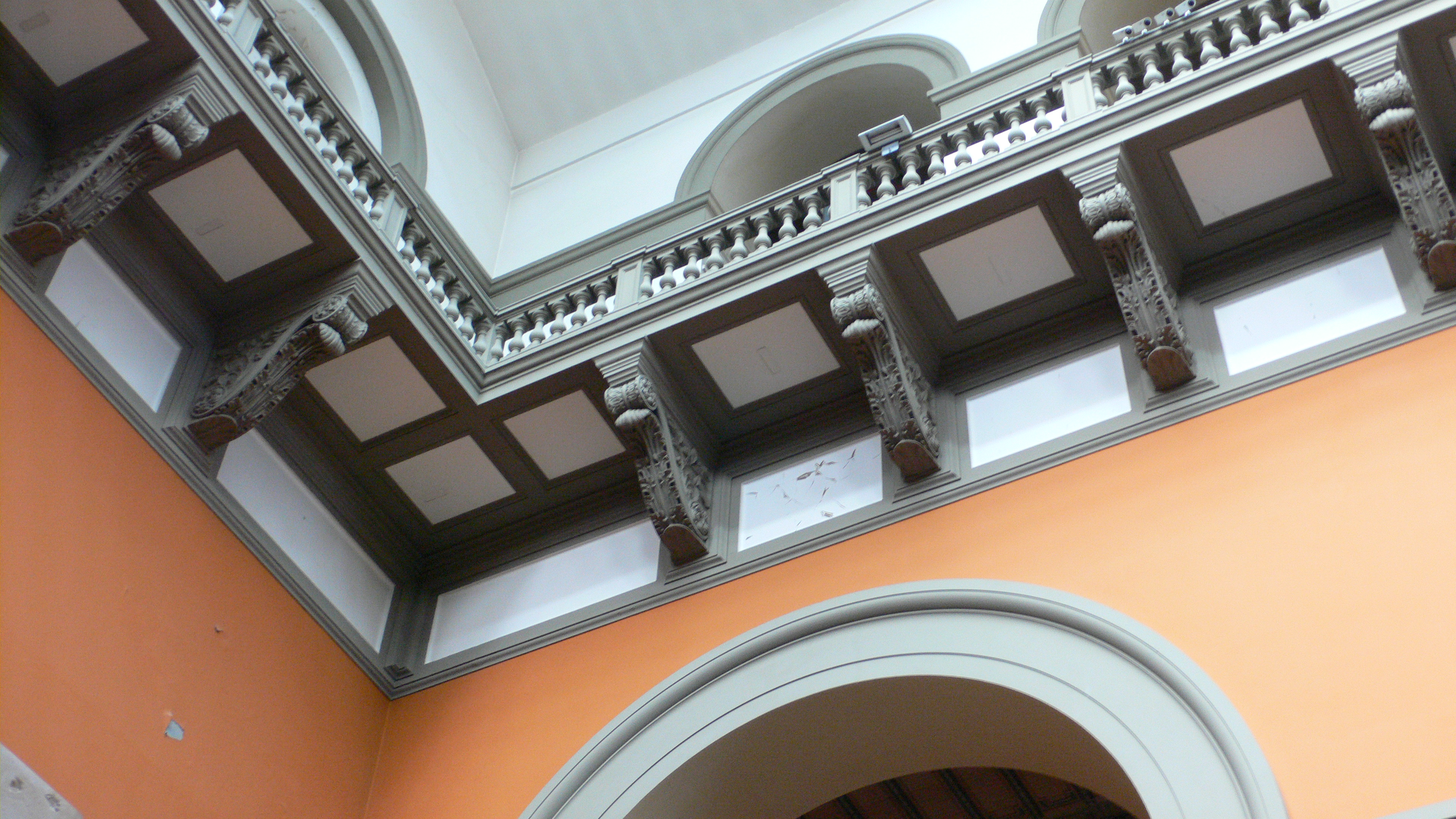 This aim of this small scale project was to determine whether there was any evidence of the original decoration of the panel beds of the frieze of the Eastern Cast Court. This investigation is part of a larger project to refurbish both Cast Courts, restoring original features, repairing damaged areas, and creating new displays of small casts not currently on display.

The two Cast Courts (originally called the Architectural Courts) were designed by General Henry Scott and opened to the public in July 1873. The courts are notable for their vast size and high 70 foot ceilings. The West Cast Court houses casts from Northern Europe and Spain, and the famous cast of Trajan’s Column. The East Cast Court displays casts of Italian architectural elements and statues. Unlike the West Court which has been subject to previous investigations which resulted in the recreation of its original decorative scheme, the East Court, as far as can be established, has not been researched. But it is recommended that archives of the Scientific Department of the Victoria & Albert are consulted to establish whether Dr Jo Darrah also carried out research in the East Cast Court.
It is assumed that the original decoration of the two courts, which were designed and constructed as a pair, would be similar. The panel beds of the frieze running beneath the high level walk-way of the West Cast Court are currently decorated with the names of Northern European towns, arranged in alphabetical order. The names are written in gilded capitals on rectangular panels framed with swags and arabesque ornament. It is assumed that this scheme is a recreation of the original scheme – but this requires clarification. 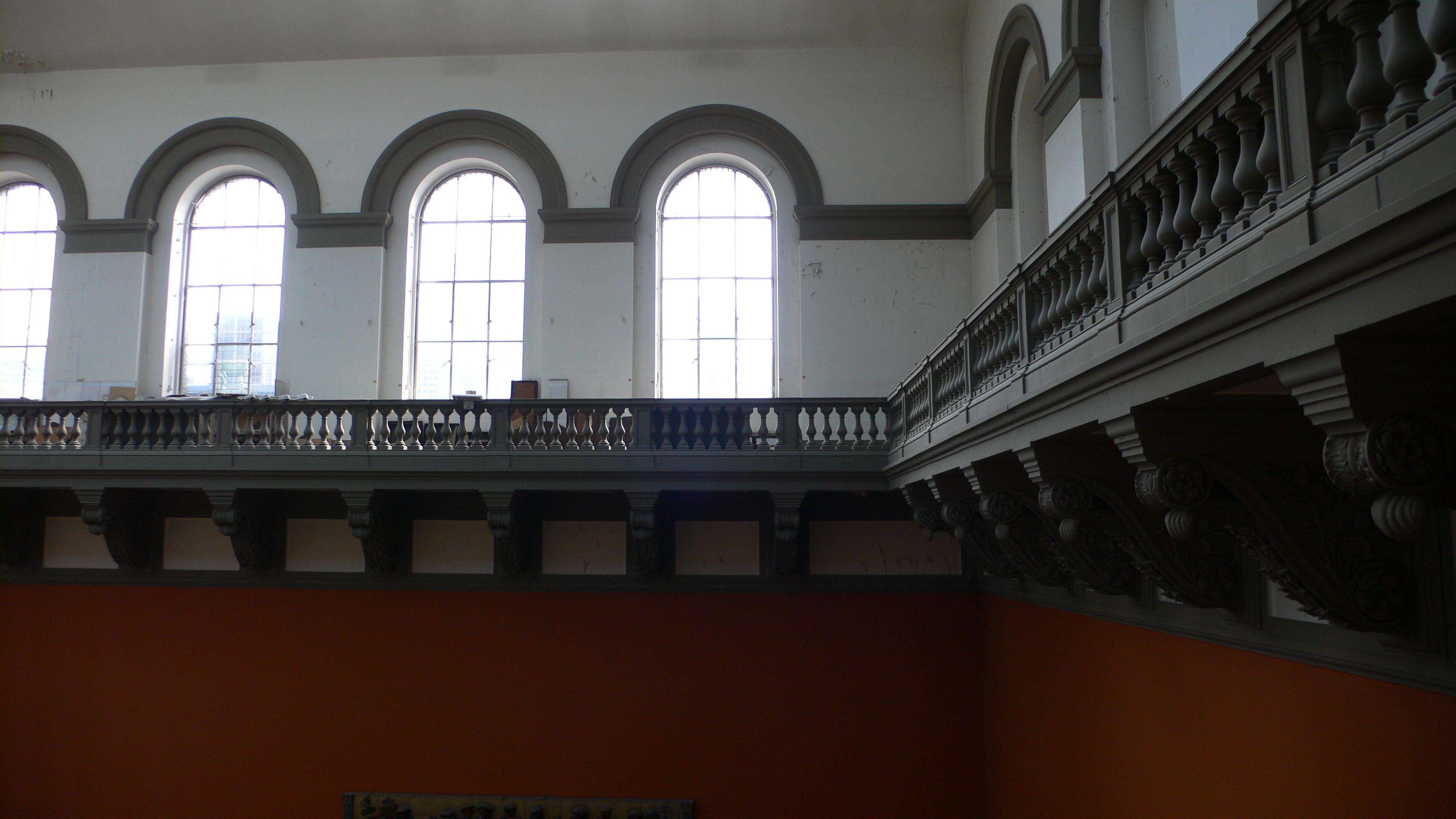 These conclusions are based on a time constrained on-site investigation and a limited number (10) samples.
• On-site observations and examination of removed samples in cross-section, indicate that the first existing decoration of the panel beds and panel bed seems to be a grey/brown distemper decoration applied over an off-white distemper undercoat. It is suggested that this is the original decoration applied in 1873.
• No trace of any lettering was observed during the investigation but this may because the limited range of samples taken missed the location a plaque – possibly naming an Italian town.
• There are traces of several bands of lining and a row of small circles which might suggest that the bed was decorated in a manner similar to those of the West Cast Court.
• The outer edge of the panel bed was decorated in a red distemper band.
• The moulded panel bed was originally decorated in a dark grey distemper
• It was observed that the distemper decoration had become worn and had flaked away in places before it was painted over in a cream coloured lead based paint.
• The cream scheme was later over-painted in a white lead/zinc oilpaint (possibly applied in 1930s).
• The existing decorative scheme – white alkyd resin and grey alkyd resin – was probably applied in the 1970s.
• Small scale trails to remove the three overlying decorative schemes established that the paint layers can be softened and removed. However the texture of the surface of the original distemper decoration is coarse or wrinkled and during small-scale trials it proved difficult to pick out the residue of the overpaint.