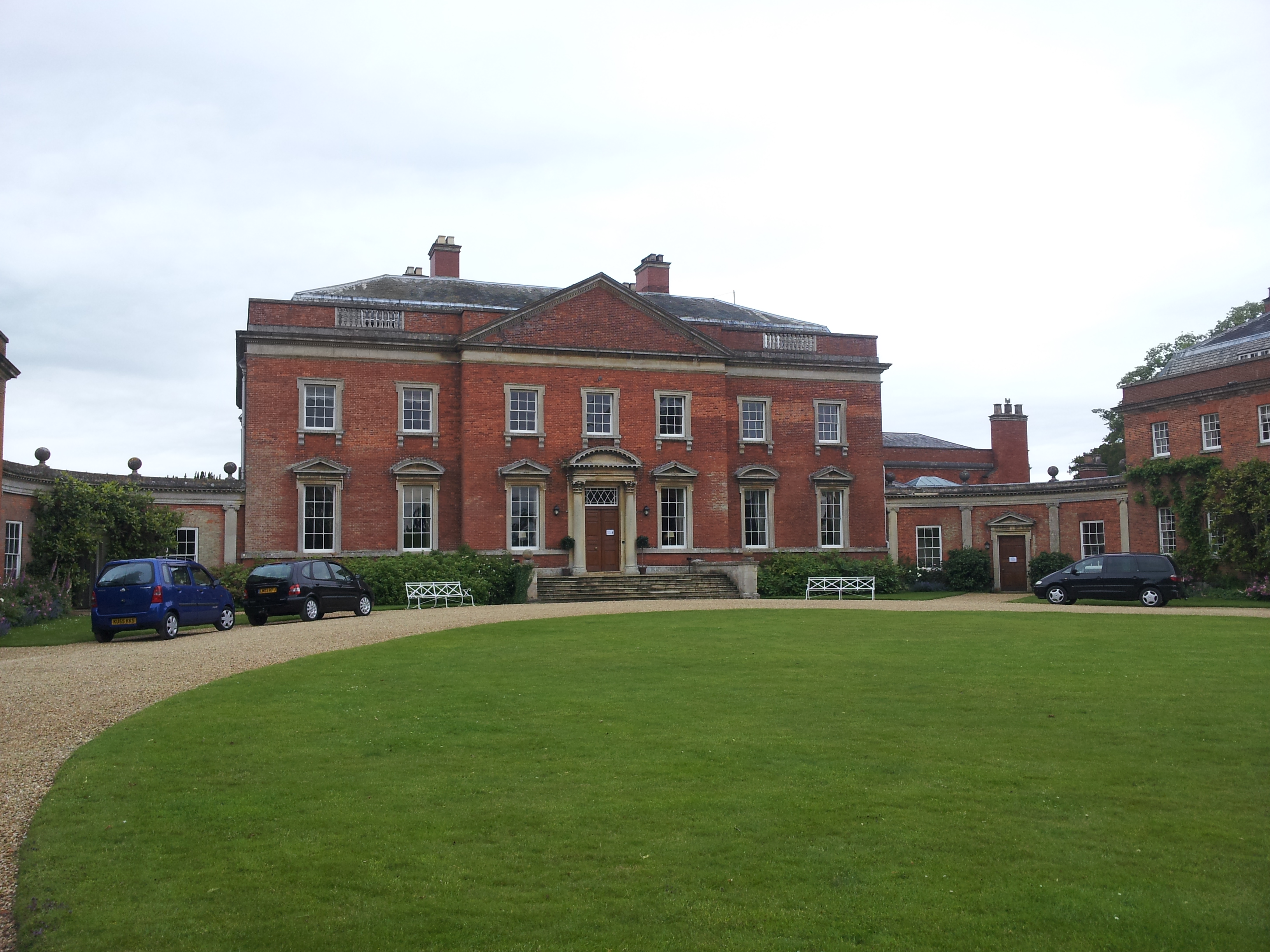 Background & Brief
Architectural paint research was commissioned by Weston Allison Wright on behalf the Trustees of Kelmarsh Hall. The aim of the research was to establish the decorative history of the Great Hall to inform conservation management decisions.

The History of the Great Hall
Kelmarsh Hall was designed by James Gibbs between 1728 and 1732. The plaster work was executed by the Atari Brothers. The building has undergone several alterations and the Great Hall and the Staircase are the only interiors which remain relatively unaltered.
In the late eighteenth/early nineteenth centuries doors and glazed fan lights were added to the northern and southern archways of the western gallery. During the mid-nineteenth century two large plate glass mirrors were installed in the shallow alcove recesses of the western wall of the gallery. These mirrors may have replaced smaller mirrors – possibly designed by Gibbs.
In 1928 Nancy Lancaster moved into Kelmarsh with her then husband Ronnie Tree. At this time Nancy recalled the hall was then painted ‘a dark rather sad green’. She proceeded to redecorate the Entrance Hall. She stated, ‘I painted the hall at Kelmarsh pink, I never thought twice about using bright colours in an old house. The pink I used was an Italian pink, a light terracotta’. By this date the original eighteenth century fireplaces had been replaced.
The appearance of the Great Hall on the completion of Lancaster’s redecoration work is recorded in the Country Life photograph of 1933 and an undated watercolour. At this date the two large mirrors were installed in the mid-nineteenth century were over-painted. Nancy re-covered the some of the chairs in striking colours. The use of striking colours, real fires, candles and fresh flowers created an interior described as ‘unhesitatingly welcoming, absolutely surprising, unashamedly elegant; a rich but fresh setting made from the melding of textures and colours .’
(Nancy Lancaster: Her life, Her World, Her Art, Knopf, 1996) 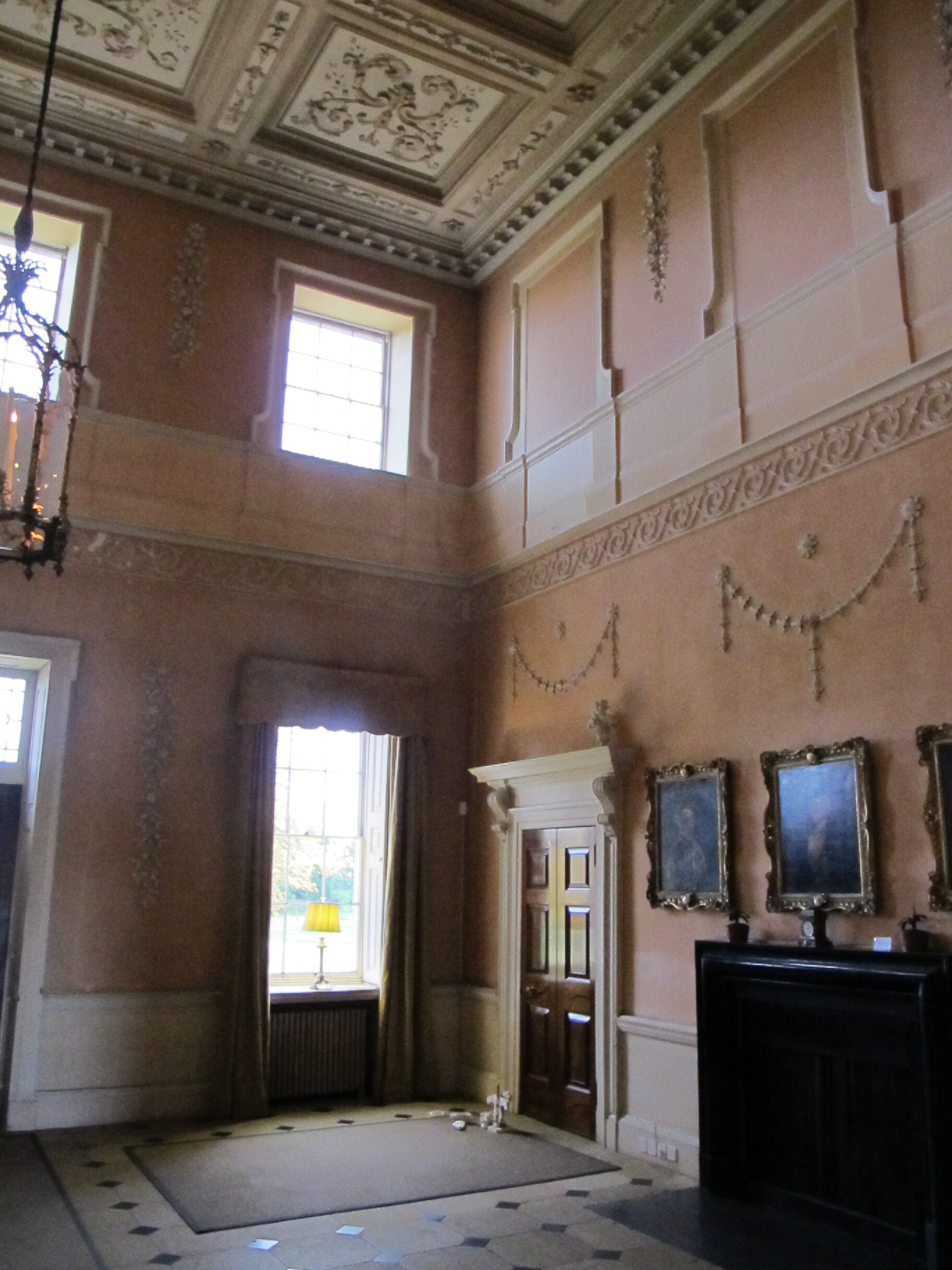 Conclusion
The examination of a series of paint samples, removed October 2012, has clarified the decorative history of the room.

Original 1728-1732 Gibbs Scheme
The ceiling was originally decorated in an off-white colour with the relief mouldings possibly shadowed with brown. The lower wall faces (below the frieze) are finished in a smooth plaster which may have provided a self-finished stucco type surface, which was not intended to be painted. The upper wall faces, and the west wall of the western gallery, are finished in a coarser textured plaster. This plaster was originally painted in a dark yellow distemper. Research discovered fragmentary traces of a coarse grey paint layer which may indicate that the internal blank windows on the south and north wall were decorated with trompe l’oeil windows. Originally the joinery of the Great Hall was painted in cream oil paint – with the skirting riser picked out in dark brown.

Late 18th and Early 19th Century Decorations
During the 18th century upper walls and the wall of the western gallery were decorated in a series of coloured distemper decorations (dark blue, blue verditer, off-white). Presumably the smooth plaster of the lower walls was not decorated at this period. The lower wall faces were probably first over-painted in late 18th/late 19th centuries in cream and stone coloured oil paints. There were clearly problems of adhesion between the smooth plaster and the applied paint. Flaking paint continues to be an ongoing problem. At the end of the 18th/early 19th centuries the southern and northern doorways were fitted with doors and glazed fanlights. In the mid-19th century large plate-glass mirrors were fitted into the shallow recess alcoves on the western wall. At this date the walls of the Great Hall were painted in a dark Pompeian red and all of the joinery (including the beading of the new mirrors) was grained in imitation of wood. At a later date the wall faces were decorated in a Dark Green and the joinery was re-grained. This is the scheme which greeted Nancy Lancaster on her arrival at Kelmarsh in 1928, and was described by her as ‘a dark rather sad green’. At this time the hall was hung with ‘dozens of crossed pikes’.

Nancy Lancaster Scheme – Post 1928
Working with her decorator c.1928 Nancy Lancaster devised a new scheme for the Great Hall, painting the walls in one shade of Pink and the joinery in an Off-white oil paint.

John Fowler – c.1950s
In the 1950s it is thought that John Fowler redecorated the room in a scheme based on the Lancaster scheme but elaborated to incorporate several shades of Pink and Cream. Both the Lancaster and Fowler schemes were executed using Walpamur – and oil-bound distemper which is a precursor of modern emulsion paints. The painted decoration is flaking badly in places.

Retouching 2007
In 2007 some localised retouching of areas of loss was carried out by the decorator Charles Hesp. He also repainted some of the joinery using an alkyd-resin painted tinted to match the existing colour.