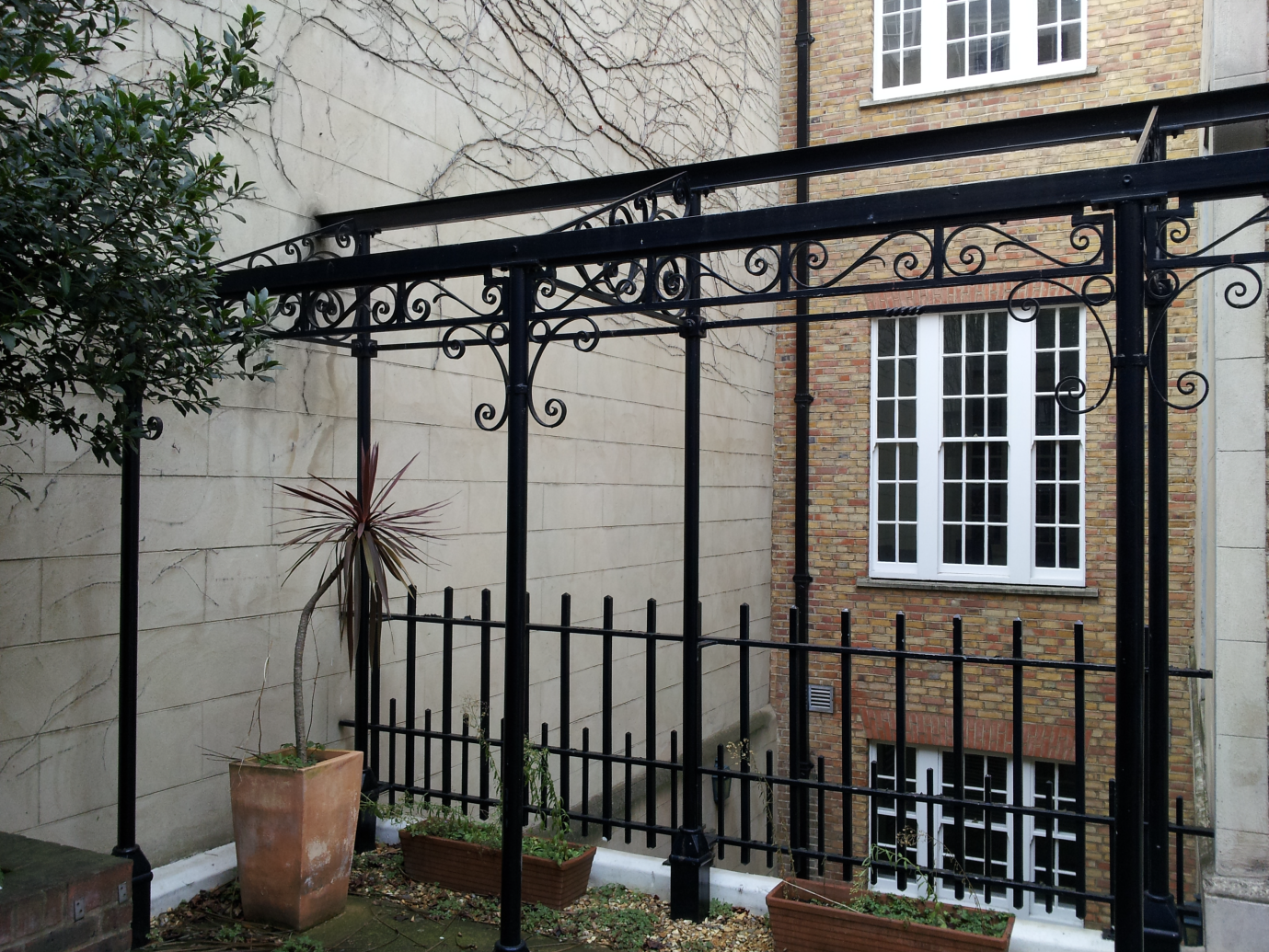 Research Brief
Paint research was commissioned to clarify the dates of three selected elements within 49 Grosvenor Street to establish their significance. These were: the wrought iron balustrade of the main staircase; the veranda in the rear garden; and the cornice of the first floor principle reception room.

History of the building
No. 49 Grosvenor Street was built in 1725. It is located on the south side of Grosvenor Street, east of Grosvenor Square. It is listed Grade II and lies within the Mayfair Conservation Area. In the 1730s Grosvenor Street was described as a ‘spacious well built street, inhabited by people of Distinction.’ And indeed between 1727 and 1862 No.49 was inhabited by a succession of earls, viscounts, barons and dukes. Since 1868 No. 49 has undergone a series of extensions and conversions. During the period 1875 – 1888, a fourth story, the existing rear wing, stables and portico were added. Some of these alterations were designed by the eminent architect Alfred Waterhouse, and others by Weeks & Hughes of Tunbridge Wells.
During the 1920s the Sesame Club, a mixed Ladies and Gentlemen’s Club first established in 1895, moved from its original premises at 25 Dover Street to No.49 Grosvenor Street. The Sesame Club made further alterations to the building in 1924 and 1936. Although the club was mixed it aimed at attracting professional women such as school teachers and offered reduced fees for women. Such clubs, offered women a respectable meeting place, and had a significant role in the women’s suffrage movement. Members during this period included, the novelist Mary Sinclair, the campaigner Lady Betty Balfour, and the suffragist-pacifist Catherine Marshall. At some point after the 1920s the Sesame Club amalgamated with the Ladies’ Imperial Club and the Pioneer Club. The club was the London residence of Edith Sitwell, who lunched there with Marilyn Monroe and Arthur Miller during their visit to London in 1956.

Significance
Only twenty of the original early-Georgian houses now survive in Grosvenor Street, and most of these have been significantly altered. No.49 is one of the few properties to retain its Georgian proportions, some original Early-Georgian fittings and overall character.
The house is also significant for the existing alterations carried out by the eminent architect Alfred Waterhouse, its role in the women’s suffrage movement, and perhaps as the site of the intriguing meeting of Edith Sitwell, Marilyn Monroe and Arthur Miller in 1956. 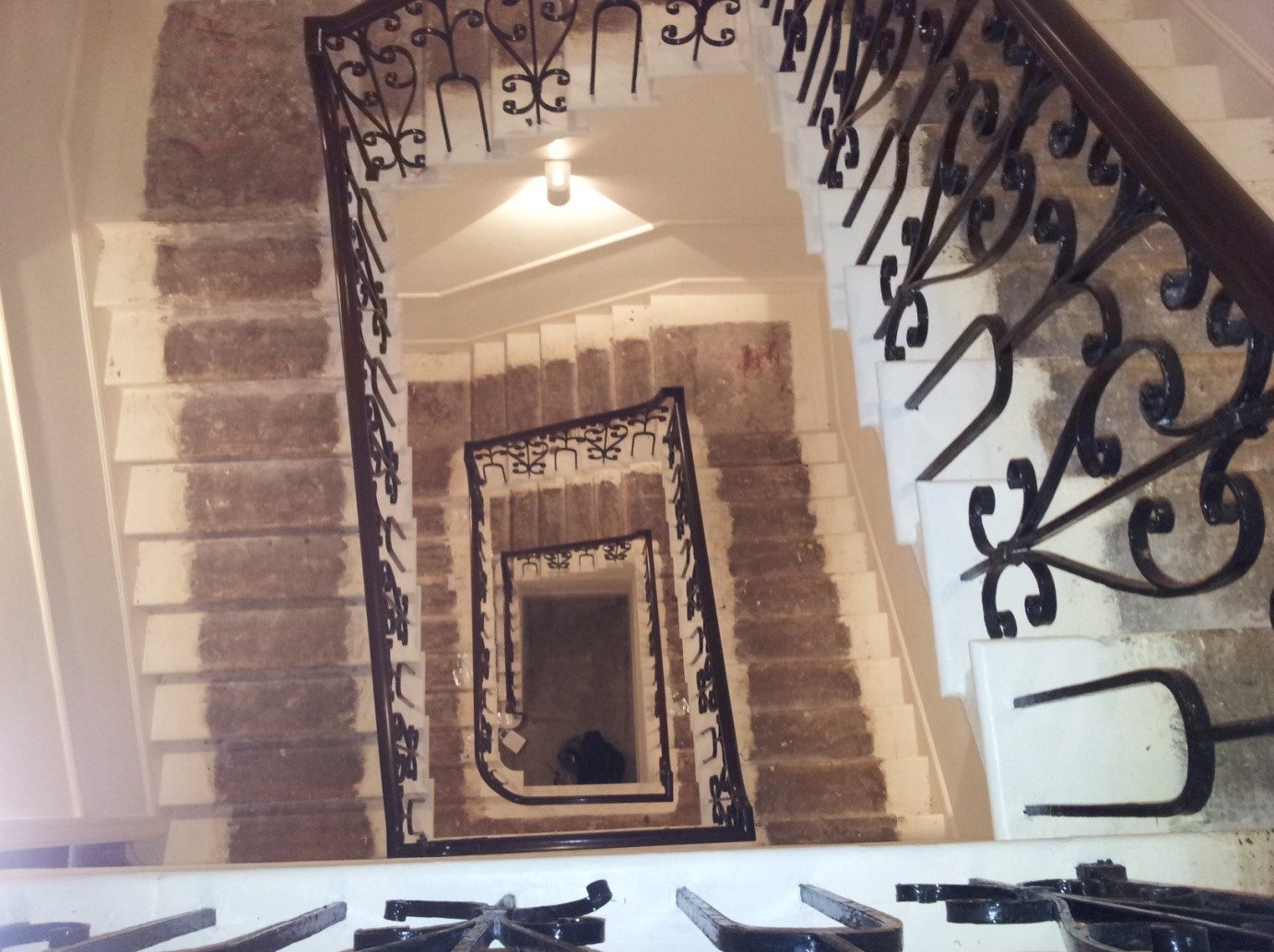 Garden Trellis
The garden trellis is a recent addition – it bears only two decorative schemes. It may be associated witht the insertion of the balustrade on the upper floors of the main staircase.

First Floor Reception Cornice
The cornice bears a substantial build-up of stone-coloured oailpaints and is made of historic moulded plaster. The ceiling roses are a Victorian feature not a Georgian fashion – and so must be a later addition.