Background & Brief
Architectural paint research was commissioned to establish the original decorative scheme of Gallery 32 of Birmingham Museum and Art Gallery. The building is a Grade II* listed building. Gallery 32 is located on the second floor of the building originally known as the Council House Extension. It was designed by Ashley and Winton. The extension building provided accommodation for four municipal departments, and a series art and museum galleries funded by the bequest of John Feeney. It was linked to the old building by a connecting bridge across Edmund Street
The building works date from the period 1912 -17. Gallery 32 was completed as part of the second phase of the extension completed in 1919. It was designed as part of a pair of two galleries. Gallery 32, a double height Gallery with an upper Gallery/mezzanine, is located to the west of the main stair. It mirrors Gallery 33 in its plan and elevations. These galleries were dedicated to the display of the collection of casts of classical Greek and Roman Sculpture.
The object of the research was to establish the original decoration of Gallery 32 and comment on the later structural and decorative history of the room. Sample locations were selected in consultation with the museum staff. Access to high levels was be provided by the museum. 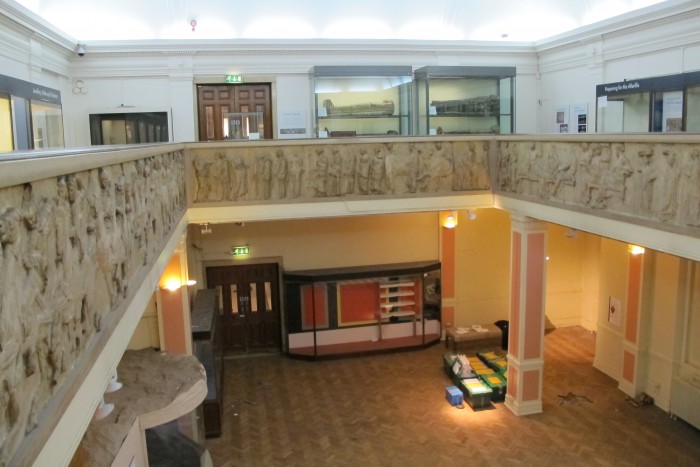 Original & Second Pre-WWII Schemes
Gallery 32 was probably completed and decorated in 1919/1920. The original decoration was quite plain. The freestanding ceiling, soffits and free – standing columns, engaged pilasters and skirting boards were decorated in a very light grey oil paint (an off-white). This light grey was coated in a layer of varnish –which may have produced a slight sheen. This light grey was also applied to the framework surrounding the Parthenon Frieze. The Parthenon Frieze was originally finished with a thin ochre wash. At later periods the patination of the frieze has been embellished with daubs of ochre paint in a fairly ad hoc manner. There is no trace of any polychrome decoration on the frieze.
The outer walls of the gallery – the upper wall, dado rail, and dado rail were originally finished in a varnished light green coloured oil paint. The radiators were painted in a dark grey. The base of the skirting – at the junction with the parquet floor – is fitted with a hardwood moulding which was finished in a dark brown tinted varnish. The window and window reveals were painted in the light grey oil paint. The frame and plinth of the Assyrian wall piece was inserted during the 1930s over the existing light green coloured oil paint – after the room had been decorated but before the application of the first cream coloured wall paint. The frame and plinth were made of a dark render which was painted in grey/black.
This scheme relates to the black and white photograph of adjacent Gallery 33, dated 1920. The light grey paint discovered also relates to the use of light grey paint in other museum galleries described in Architectural Review of 1912.
The Gallery has been repainted four times – with some localised repainting and embellishment.
At a later date, possibly after the removal of the sculpture casts but before WWII, the light grey was repeated using a zinc-based paint. The original light green paint applied to the outer wall faces was over-painted in a cream coloured oil paint. This cream scheme pre-dates the erection of the Jericho Tomb.

Post WWII decorations
The walls were repainted twice in a cream coloured paint (and in some places an additional green-grey scheme was applied) before the being decorated in a grey and pink scheme. This scheme was obliterated by a dark green scheme which was applied to all of the architectural elements within the gallery.
The existing scheme – off-white with soffit, column and pilaster beds picked out in pink was probably applied within the last 20 years.