St Michael’s and All Angels

Construction of the Church 1830

St Michael’s church is a rare example of an early of a Gothic Revival church, constructed shortly
before Queen Victoria began her reign. The church was designed by George Smith (1782–1869). His works include buildings built in the Neo-classical and Gothic Revival style. He built the Whittington Alms-houses at Highgate (demolished 1970s) for the Mercers’ Company in a Gothic Revival style. Pevsner noted that the Company had sufficient wealth at its disposal to afford “a great many crockets”. In 1832-1833 Smith replaced the body Hornsey church with a white brick Gothic structure, leaving only the medieval tower standing.

St Michael and All Angels, formerly known as Trinity, St Peter’s Chapel or “Mr Cator’s chapel” was originally a proprietary chapel, paid for by J B Cator who donated £4000 and a plot of land in the centre of his own estate. At this time housing was being developed in the Blackheath area and a church was then considered essential for any new residential development. However, parishes were reluctant to change their existing boundaries. A solution was to create a proprietary chapel, usually paid for either by a benefactor, and then licensed by the Bishop and sitting only loosely within the Church of England.
Smith used a free interpretation of Gothic for the new chapel, which was, by 1830 the most widely used style for churches. The church was built of white brick with stone facings. It was fitted with a distinctive spire, which is described in the Buildings of England as this and fanciful. It is also known as “the Needle of Kent”. The church was built by William Moore, a local builder. There is no record of the original internal decoration of the chapel. The architectural detailing of the interior is simple, the decoration is concentrated on the reredos in the east and the organ-case in the west. Smith’s reredos has been described as original and as ‘unscholarly’ as his other work. It is fitted with inset metal panels decorated with the Ten Commandments, the Creed, the Lord’s Prayer and the symbols Alpha-Omega (beginning and end in the Greek alphabet) and IHS (the first three letters of Jesus’ name in Greek). It is thought that these are probably later insertions, painted on metal, c.1881 copies of original 1830 prayer-boards. 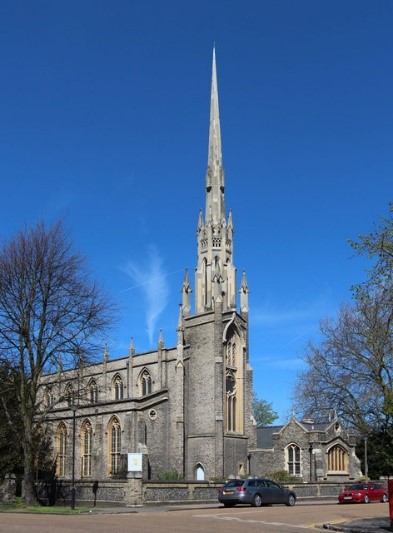 At some date, during the early 19th century the two galleries were added.
The first minister, Joseph Fenn, remained in post until 1876. In 1874 the chapel was consecrated as a parish church and was renamed St Michael and All Angels. The first major alteration was carried out at this date. The vestry was added to commemorate Fenn’s ministry in 1878/79. It is thought that the interior would have been redecorated at this time – possibly in an ornate stencilled decoration. Shortly after, in 1881-2, the North and South porches were added.
In 1881 the interior was reordered. A memorial in the south aisle to Charles Edward Shaw (d. 1879) states that the seating was re-arranged at this time. The existing pine pews replaced the original higher pews, exposing sections of the bases of the nave columns. It is presumed that the interior of the church would have been redecorated at this time – but no documentary records survive. A black and white photograph taken c.1890 (Fig.1) shows that the interior was decorated in an ornate stencilled scheme. This scheme was painted over before c.1920 (Fig.2) – but traces of a stencilled scheme appear to be retained on the ceiling of the nave and the galleries until c.1960 (Fig.3).

• 1920 – The pulpit was added as a WW1 war memorial
• 1919 – Pulpit removed, reading lectern altered/removed, east end adapted for the choir, choir brought down from the gallery at the west end.
• 1968 – Rear pews removed, noticeboards added to back of pews
• 1981/2 Chancel reordered, the choir stalls were removed and octagonal platform installed, communion rail adapted to be moveable and new rails made to complete ‘in the round’ eucharist layout.