If required more advanced material analysis may be commissioned from specialist laboratories. The technical data will be interpreted by HIRC in the context of the project and other research.

The Scanning Electron Microscope (SEM) image of a paint sample removed from an 18th century chapel reveals the accumulated layers of traditional paint beneath the post WWII modern paint. The EDX spectrum of the modern top layer (Layer A) reveals the complex composition of modern paints. 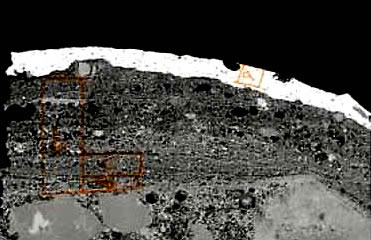 The wallfaces of the Entrance Hall and Staircase at Danson House were originally painted c.1760 in a distinctive yellow coloured paint.  Analysis of the paint using SEM/EDX revealed that the yellow pigment particles contained lead (Pb) and antimony (Sb) indicating that the pigment was Naples Yellow (a lead antimonite).  Naples Yellow was available from the early 17th century and was used by artists, but was not commonly used  in house-paints until the mid-18th century.

The pigment was also identified using polarising light microscopy.  A dispersion of the paint layer was examined  under transmitted polarising light for the characteristic properties of Naples yellow 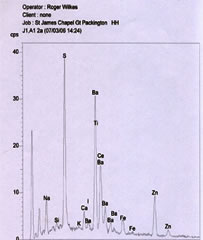