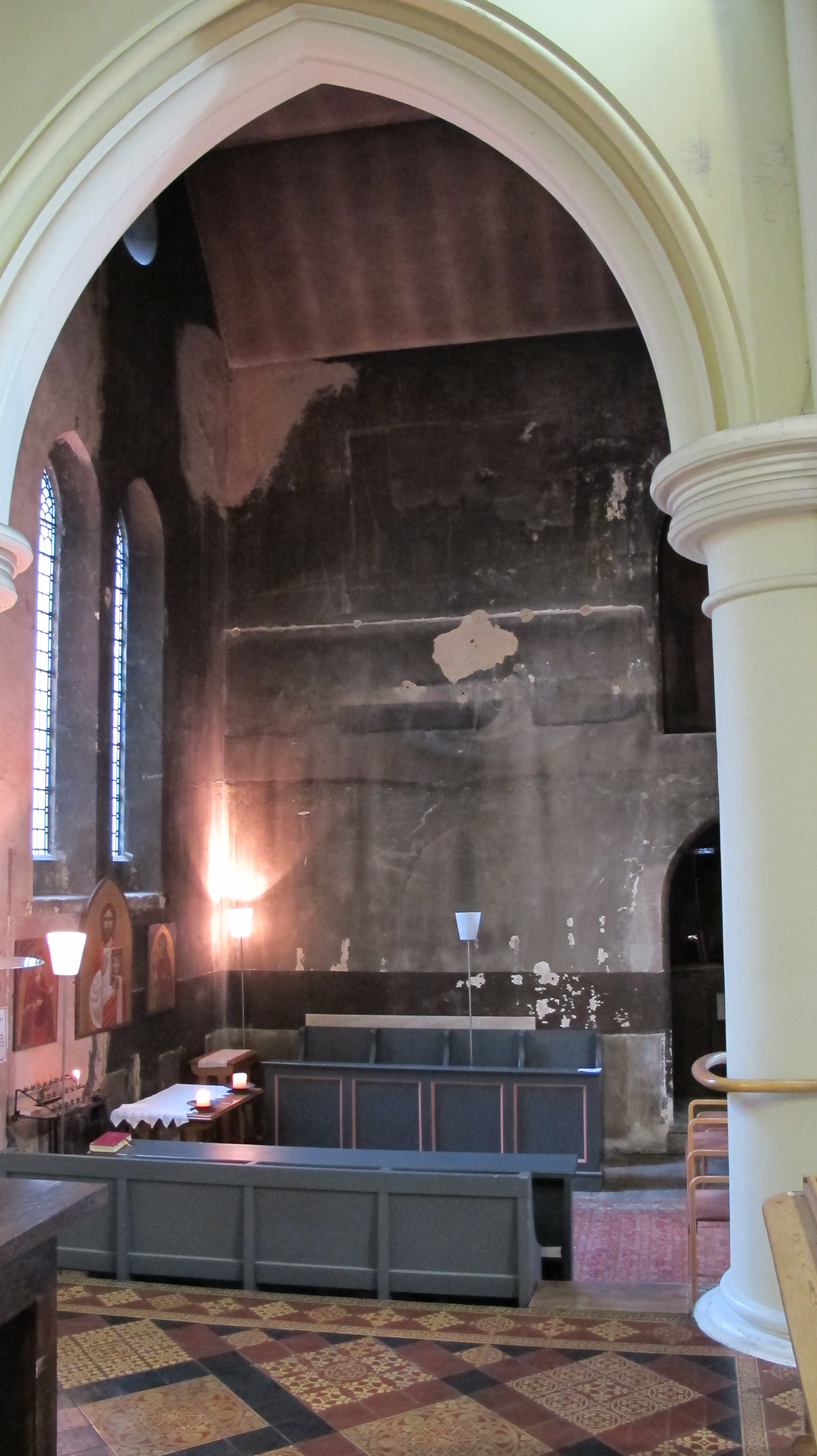 Richard Griffiths Architects have been commissioned to manage the re-ordering of the interior of St. John’s Ladbroke Grove. These works will include the removal of the John Avery organ (listed Grade II*) from the southern mini-transept and the re-fitting of a Lady Chapel in the vacated area. The project will also involve the redecoration of the church – possibly recreating sections of the original c.1845 scheme in the chancel and removing over-paint from the 1890 Aston Webb/Emmeline Halse reredos.
Paint research and conservation advice is required to establish the decorative history of the interior of the church to inform future conservation and re-presentation of the interior of the church.

The Mini-South transept was originally fitted with an upper gallery. It was simply decorated on an off-white distemper (broken with yellow). It was redecorated about four times in distemper decorations. The last distemper decoration is a very light green (white distemper broken with yellow and black). At some date prior to 1873 when the area was closed a painted cream coloured dado was created. The cream paint was also applied to the stone architrave of the doorway. This was a practical measure to protect the lower wallface. At a later date but before 1873 this dado was repainted in a light brown colour – a thin brown glaze applied over a cream undercoat. This was a very cheap form of graining which provided the colour of light oak without any attempt to imitate the figuring of the wood. A black line (dado rail) was painted at the top of the dado. This decoration was retained when the mini-transept became the Organ Chapel (See reconstruction of scheme).

The Chancel of St. John’s was reconfigured in 1890. The floor level was raised and a new rerdos was commissioned from the architect Aston Webb and the sculptor Emmeline Hasle – both parishioners of St. John’s. Emmeline Halse worked on the sculptural groups for over two years. The piece was fired by the company of Doulton at the Lambeth Palace workshop where it was reviewed by The Builder in August 1890. The reredos was installed in St John’s later in the year and dedicated at the Harvest Festival of that year.
Terracotta sculptures were commonly painted to imitate more expensive types of sculpture such as bronze of marble. Examination of paint sample from the reredos suggests that it was decorated in parts to imitate a bronze and gilding. The architectural frame was decorated in subtle shades of brown and green dusted with bronze powder. Selected moulding were painted with gold paint to suggest gilded elements. The sculptures were more thinly painted – the pink ground of the terracotta being toned with as thin dark glaze – to create a more naturalistic appearance. The back ground behind the three central groups may be painted to suggest a landscape. The high relief angels were painted in gold paint modelled with a black glaze – set against a bronzed background.
The reredos was painted in 1955-7 when the firm of Milner & Crace ‘rearranged and redecorated’ interior of church. At this time the stone arch of columns of the interior were also overpainted. The reredos has been repainted twice since then. Trials were carried out to remove the three post 1955-56 decorations. The two later decorations were readily soluble but the 1955-56 decoration (probably a lead-based linseed oil) was very difficult to remove without damaging the original decoration. However it is possible using the information from the cross-sections and small revealing trails to suggest the original decorative scheme (See reconstruction of original scheme). It is suggested that further trials are commissioned to assess if it is possible to reveal the original scheme. If this is not feasible it may be possible for a specialist decorator with experience of bronzing to recreate the original scheme. 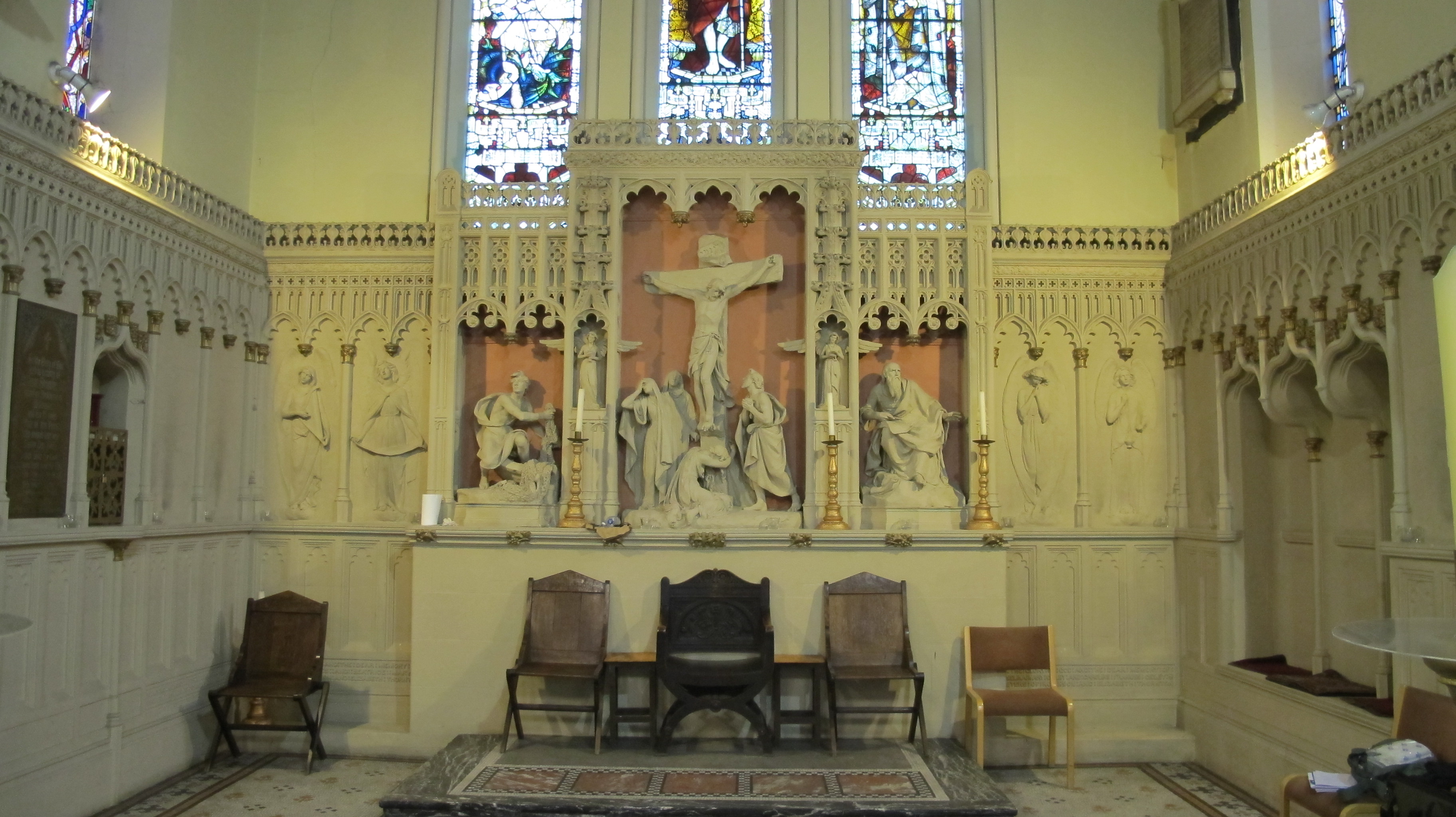