St Patrick’s Church in Soho Square London was built between 1891 and 1893 following the designs of John Kelly of Leeds. The existing church replaced a smaller chapel built in 1792. It is Grade II* listed.

In 2010 areas of the interior of the church was suffering from water leaks which was causing plaster and paint loss in several areas. Between 28 February 2010 and 31 May 2011, the church was closed for renovation and refurbishment. During the five years since the redecoration was completed active paint flaking and incipient flaking have been observed in several areas. It has also been established that recent excavations for the new underground tunnel has caused some structural movement on the south side of the building. A survey of the interior was carried out in January 2018 to determine the causes of paint cracking and paint loss within the interior. 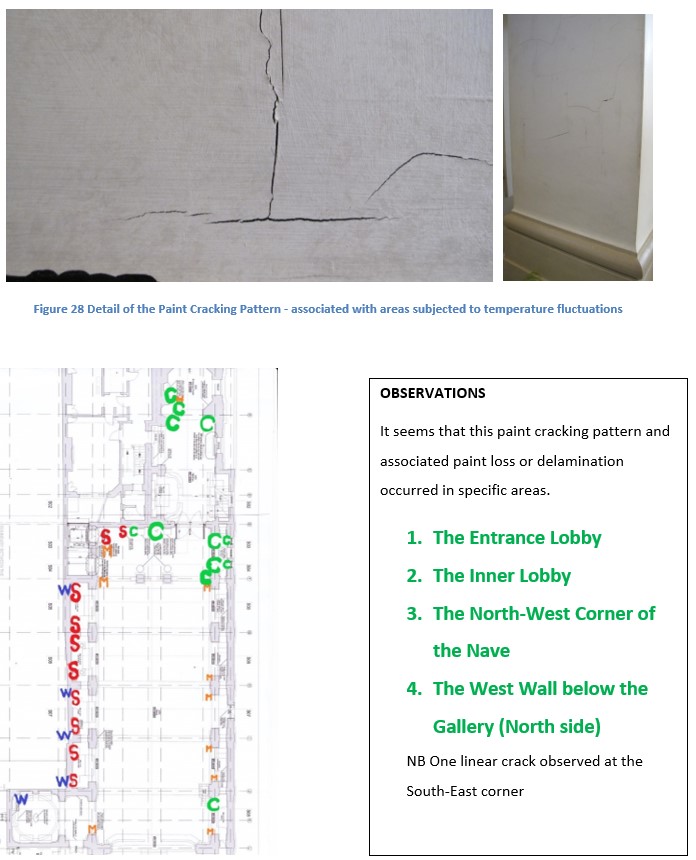 The location of the paint cracking can be associated with areas of the interior of the church which are subject to extreme temperature fluctuations. Which cause the underlying layers of varnish to expand and contract. This movement cracks or splits the overlying paint layers.

The Paint Cracking is most noticeable in the North West Corner of the Nave where there are two factors at play:
• The heat from the votive candles located between the 5th & 6th Piers. This candle stand is the most used candle stand within the church.
• The cold air from the Inner Glass Door
The wall behind the candle has evidently cracked and this maze of cracks has been retouched along the lines of the cracks. The surface of this wall obviously heats up and cools. The north end of the rear west wall also shows signs of paint cracking caused by the changes in temperature in this area.

Entrance Lobby & Inner Lobby
The walls of the two lobbies show Cracking Pattern on the inner walls. The areas subjected to direct sunlight show extreme cracking. The walls of the inner lobby also show cracking pattern probably caused by hot and cold air meeting in these areas. Paint analysis had established that these elements bore layers of thick varnish which would react to changes in temperature causing the overlying paint to split.