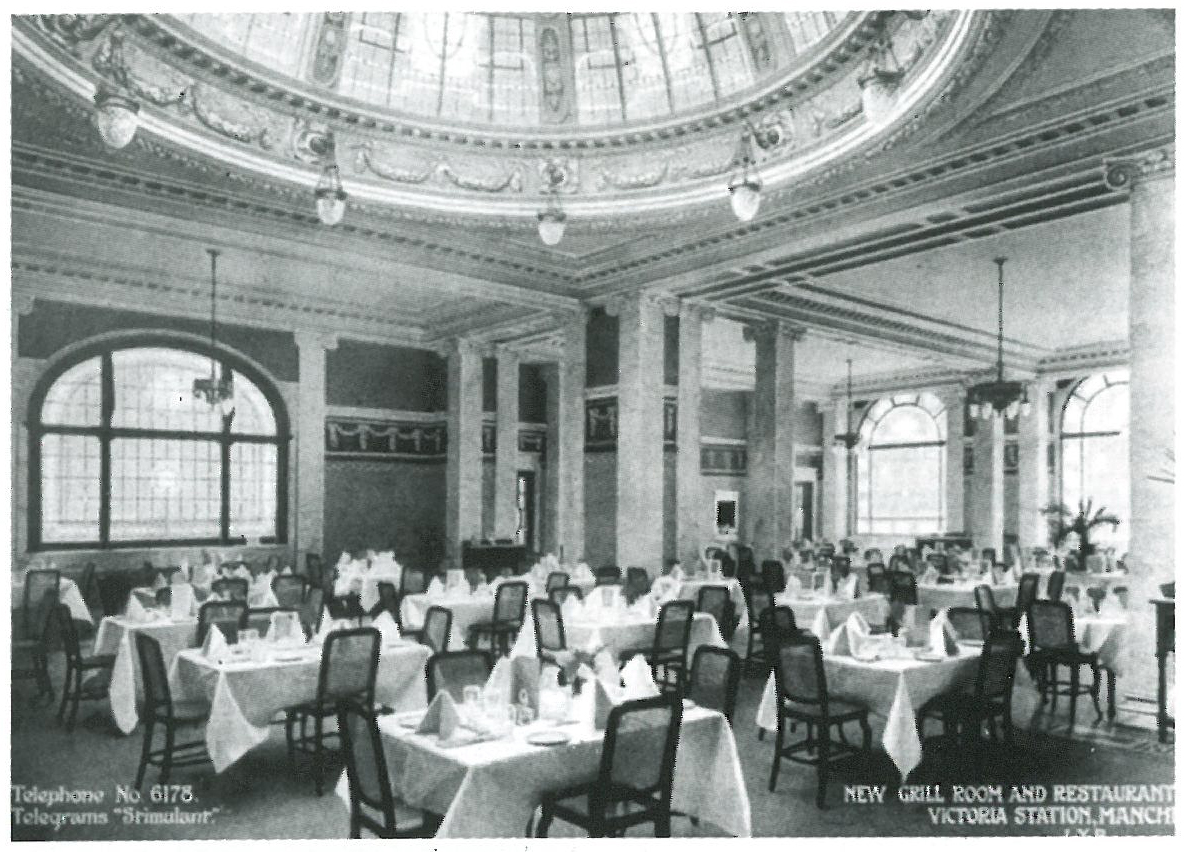 Investigation of the painted decoration of the Dining Rooms (built 1909) at Victoria Station was required to inform the proposed redevelopment of these areas. The five areas under investigation (see below) retain most of their original fittings and remarkable wall and floor mosaics, ornate ceiling mouldings, wooden panelling and stained glass.
The proposed removal of later partitions, the repair and restoration of local damages, together with surface cleaning, and the installation of more sensitive lighting and furnishings will help recapture the original elegance of these interiors. There are painted elements within each area; ceilings, mouldings and upper walls which have been repeatedly over-painted since 1909. The establishment and possible recreation of the original painted decorations would no doubt assist in restoring the architectural intentions and enhance the original fittings.

Manchester Victoria Station opened in 1844. It was gradually modified and extended during the latter half of the eighteenth-century. The final extension, which included the restaurant and cafe suite, marked the peak of the stations development, and was completed in 1909. It also included the erection of a new block of offices along Victoria Station Approach. The new building was designed by Sir Charles Herbert Reilly (1874 – 1948) Professor of Architecture at Liverpool University, who was to become very influential in the Modern Movement, acting as consultant architect for the London Peter Jones and John Lewis department stores. His early work at Victoria Station displays a mixture of Art Nouveau and Classical elements. The ground floor of the new building provided passenger amenities which included a first class restaurant and a first class refreshment room. There was a second class restaurant located at the south side by the booking office. There was a cafe for more general use, which included a large ‘smoke room’ and a separate room for ladies and children. The cafe was connected to a server, kitchen, stores and a waitress retiring room. The entrance to the cafe was located at the south end of the building with an entrance from Long Millgate. (source Tom Wray Manchester Victoria Station, 2004)

The 1930s saw the beginning of the decline of the condition of the station. Sections of the roof were removed in 1935. In the 1937 a section of the porte cochere was removed after it was damaged by a collision. The station roof was damaged during WWII. The porte cochere was removed entirely in the 1960s. The number of platforms in use was reduced and significant remodelling took place in the early 1990s.

In November 2009, it was announced that Manchester Victoria was officially the worst station in Britain and as a result the station was to receive a grant of £50 million to fund an emergency rebuilding programme. This grant was withdrawn as part of the spending cuts but new funding provided by Network Rail will finance the refurbishment of the station as part of the Northern Hub. The station will become an interchange for local and regional services throughout the North West of England. The old office buildings will be developed for new use as a hotel. It is proposed that the dining room complex will be incorporated into the new hotel.
Areas to be researched

• Examination of the paint samples removed from the five areas (Grill & Restaurant, Refreshment Room, Smoking Room, North Lobby and South Lobby), indicate that the ceilings, cornices were painted in a translucent Alabastine-type paint which had been varnished in a light glued based varnish.
• This type of ready to mix water based patented paint was developed in the USA and became available in the UK in the 1900s. It was available in powered form (gypsum, glue with whiting and zinc added to some products) and was mixed with water to create a fluid paint. The paint was essentially a form of Plaster of Paris. It had to be used within 5 hours of mixing because the paint would then harden to form a hard crystalline surface. The paint could be tinted with coloured powders to provide a range of colours.
• This type of paint was ideal for the decoration of the ceilings, mouldings and upper wall faces of the dining rooms at Victoria Station, as it was slightly translucent and its surface sheen would have matched that of the adjacent tiles and mosaics. It was also valued for it hygienic properties and was marketed as a sanitary paint.
• The wall plaster of upper wall faces in the Grill & Restaurant, and North Lobby has been replaced – probably in the 1960s – and so it is not possible to determine the original colour of the wall faces in these areas. The c.1909 photograph suggests that the paint in the Grill & Restaurant was dark in colour.
• The wall plaster in the Smoking Room has been retained. The wall faces were decorated in an Alabastine-type paint tinted to a light green shade.

• The ceilings and cornices and decorative mouldings were repainted in repeated light-cream lead-based oil paint. These became progressively darker during the 1920s and 1930s.
• After WWII, when modern alkyd-resin and acrylic emulsion paints were available the walls and cornice were painted in shades of cream and white.
• The red decoration of the ceilings in the Grill & Restaurant is not original. The colour may have been introduced during the pre-WWII period. The polychrome decoration of the frieze dome is the most recent decoration. Original the frieze was painted in the Alabastine-type paint.