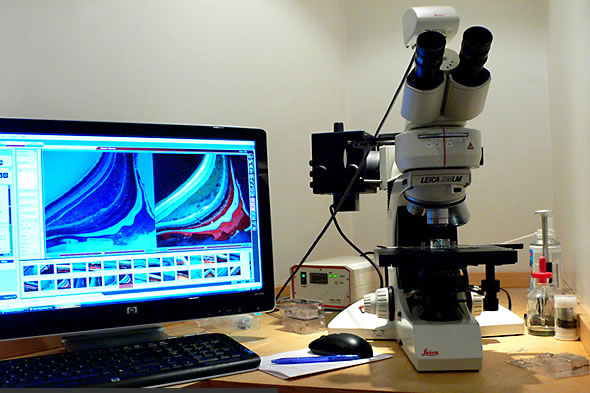 After establishing the aims and scope of an architectural paint research project the researcher makes a survey of the documentation relating to the building and any existing research.

Every historic interiors investigation begins with a desk-top survey – a search for any photographs, watercolours, accounts, inventories or written descriptions of the room or the building which may provide key dates for the creation or later alterations. Although these might not seem at first glance to be directly related to redecoration issues they can hold invaluable clues. For example a nineteenth-century inventory reference to ‘curtains for the double doors’, in a room which no longer possessed double-doors, instigated a hunt for the missing doors and the blocked wall. The doors were eventually found in the basement of the building, being used as a makeshift partition and still retained their original decoration.

A colourful watercolour dated 1820 depicted every detail of the 1815 decoration of an ante-room at Kenwood House was unearthed after the interiors research had been completed. Although it was gratifying to have the research findings confirmed by this visual documentation, the project would have been completed more quickly – and much more cheaply if this evidence had been examined at the beginning of the project. So please do share your documents with your researcher.