Priory row 10a & 11, Coventry
Research to determine the original painted decoration of the main facade 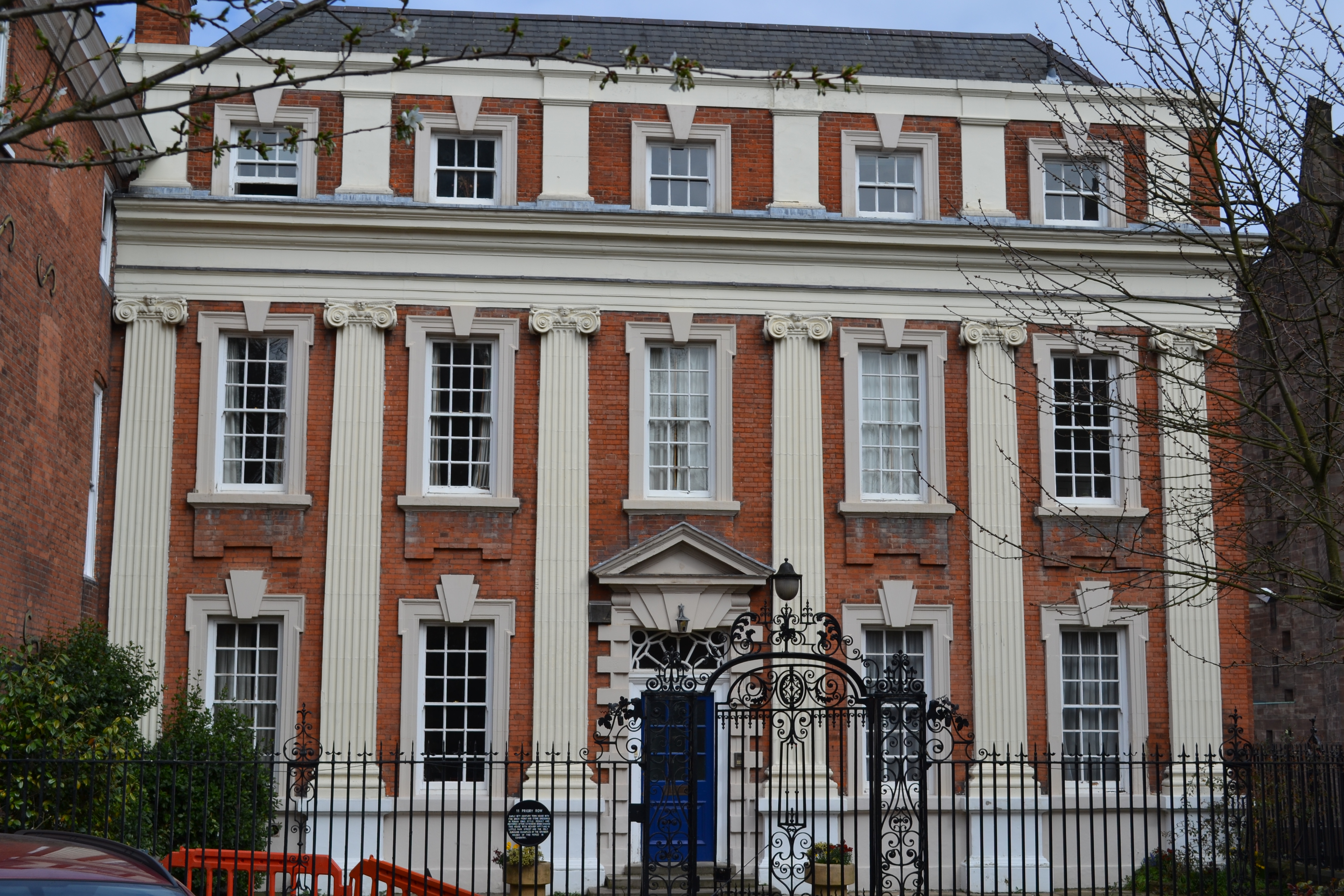 The site of 11 Priory Row was formerly occupied by the chancel of St Mary’s Cathedral. The property still retains some of the monastic cellars. The ecclesiastical buildings were demolished during the sixteenth century leaving a series of ‘ruinous hulks’.
In 1721 David Wells purchased the site and proceed to construct ‘a town house of considerable architectural pretention’ which had been completed by 1741. David Wells was a wine cooper and the decoration of the wrought-iron gates and railings includes vines and bunches of grapes – thought to be a reference to his profession. It has been suggested that Francis Smith of Warwick, who was influenced by James Gibbs, was responsible for the construction of the building. The facade includes a number of features characteristic of his work. Comparison has been drawn between the facade of No. 11 Priory Row and Sutton Scarsdale, Derbyshire (1724-7) where the use of giant order pilasters is a defining feature. The brickwork relief panels below the first floor windows of No. 11 Priory Row are a feature of Francis Smith’s at Loton Park (Shropshire) 1712, Chichley Hall (Bucks) 1719-23, Kinlet Hall (Shropshire)1727-9, and 16 Little Park Street (Coventry).
The architectural historian Andor Gomme did not believe that No.11 Priory Row is the work of Smith. He describes No. 11 Priory Row as a ‘…grandly classical with a full ionic order right across, Gibbs doorcase and heavily moulded window frames; the attic lumpishly proportioned pilaster strips is uninspired, but the facade has an impressive weightiness, helped by the full entablature and a sound knowledge of the orders….’
In 1741 David Wells sold the ‘new mansion’ to John Hollyer, a vintner.

Later history of No.11 Priory Row

The successive ownership of No.11 Priory Row is well documented. It would seem that the building was always kept in state of good repair. It narrowly survived post-WWII plans to demolish the building. 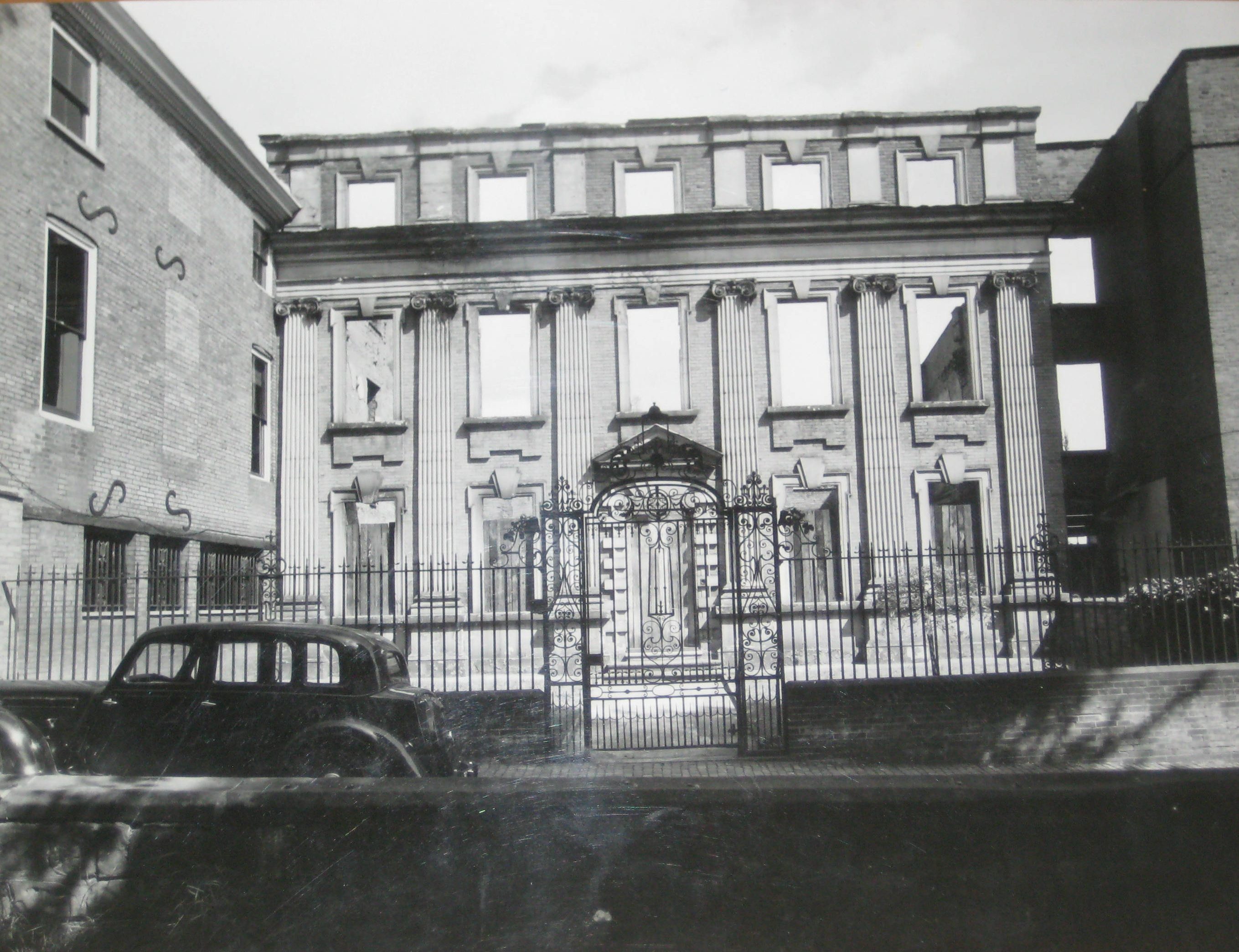 • Architectural paint research established that the Ionic stone detailing of the facade was originally painted in an uniform off-white lead based oil paint (a very light grey tinted with carbon black and yellow ochre) which may have been an attempt to suggest a grey marble.
• Traces of a red iron oxide primer were observed on some ground floor elements.
• The original decoration was repeated once. The formulation of the paint of the second decoration is very close to the original that it reasonable to assume it was applied by the same decorator – possibly re-using the remains of the original paint.
• The facade was re-painted about twenty-five times. There is no sign of any attempt to remove/strip the early paint layers.
• It was noted that subsequent decorations were slightly warmer and browner in tone.

• The 18th century railings have been heavily stripped and repaired but traces of early light grey coloured lead-based oil paint decorations which probably date from the 18th century (when grey or ‘lead colour’ was the standard finish for railings and gates) were observed on several samples.
• No signs of any gilded or coloured picking out were observed on any of the samples removed. Samples were removed from the grapes and vines but these only retained traces of 19th and 20th century decorations (dark green and black).