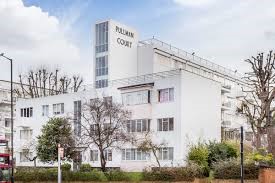 Pullman Court is a Grade II* listed building. It is located on Streatham Hill, London. It was the first major work by Sir Frederick Gibberd. It was built in 1936. Pullman Court is one of the first developments of flats built in the International Modern style in Britain. Its style owes something to the work of Walter Gropius and German constructivism, with a variety of detailing and refinement not found in other British flats at that time, and with a practicality in the features and fittings that was also unusual and far-sighted. A review of the building written when it was completed describes the orange and blue facades of the building, evidence of Gibberd’s awareness of the use of polychrome in the decoration of Modern Movement buildings and colour theories then being developed by Le Corbusier. (Ref. Architecture, Design and Construction, July 1935 Building, February 1936 Architects’ Journal, 6 August 1936)

In the past, the 1930s journalists’ descriptions  of the coloured façades of Pullman court were discounted somewhat biazzarely as ‘design intentions which were not executed’. The ardent belief that Modern Movement buildings were all painted white has now been disproved by academic research and the archaeological investigation. There are no coloured photographs of the exterior of Pullman Court in the 1930s and the original paint was stripped off during the refurbishment project carried out in 1995. Research carried out by English Heritage’s Architecural Paint Research Unit in the 1995 which removed paint as the external elevations were being stripped found evidence of orange and blue paints which had been applied to the external facades of the three blocks.

It is suggested that these paint samples are re-analysied to clarify the date of application of these coloured layers and attempt is made to suggest the appearance of the original colours. The samples are retained in the English Heritage Architecural Paint Research Archive, presently housed in the conservation Department of Lincoln University.