The façade of this Grade II listed block (55 – 91 Knightsbridge) was designed by the architect W. D. Caröe. The building was erected between 1902 to 1905 for use as a mansion block with a series of ground floor shops. The original shop owners complained that Caröe’s design for the shop fronts disregarded the requirements of the occupants. One, a butcher, complained of the ‘unprecedented pretensions of the architect desires to dictate and impose upon them shop-fronts totally unsuited for their trades.

The businesses who originally occupied the ground floor shops included, the Byzanotype Portrait Company, art dealers, Robersons Ltd, period-interiors specialists, a newspaper advertising agency, a theatre-ticket office, a bridge club, and one of Hamley Brothers’ toy-shops. Tenants had problems paying ground-rent and the problem became acute during the First World War. By 1917 all the new row businesses had closed, some tenants decamped owing rent, and shops and flats remained empty, in some cases for several years, or occupied at nominal rents. After the end of the war trade improved and the block was again fully occupied. Since the Second World War the shops in the block have been largely occupied by clothing and footwear retailers. The timber shopfronts have undergone considerable alteration, and only a few original examples survive. 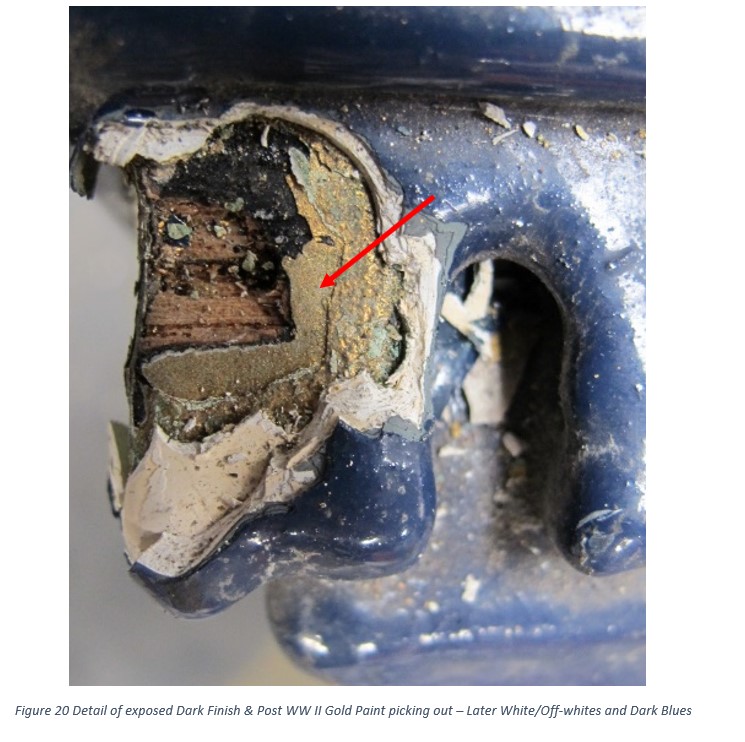 On-site investigations and the examination of mounted samples at high magnification under normal and ultraviolet light (x50 – x500) revealed that original hardwood elements of the shopfront of No. 67 had originally been finished in a Brown/Black paint and then varnished. A black and white engraving of c.1905 suggests the woodwork of the shopfronts were painted in a uniform dark colour. Previous research established that the softwood window frames had originally been grained in imitation of a hardwood – most likely to match the hardwood shopfronts.

It is probable that this finish Brown/Black varnished finish was routinely stripped and renewed as the shopfronts became worn and dirty. The wood may have been re-finished using a wide variety of dark paints, stains and tinted varnishes to produce the same visual effect. During the period from 1905 to the post WWII there were periods of neglect when the shops were unoccupied, and the applied finishes may simply have worn away exposing the surface of the hardwood.
During the 1960s when modern alkyd resin paints were becoming available, the shopfront on No. 67 was paint in White Alkyd Resin paint with selected details (dentils and recesses of fluting) picked out using Gold Paint. This first decoration was applied over a layer of silver coloured metallic under/coat primer. This shopfront was repainted 20 +/- in White/Off-White Alkyd Resin paints. The gold detailing was repeated during the first five decorations after which the shopfront was painted plain White/Off-White Alkyd Resin paint. More recently the shopfront was painted in a Dark Blue Alkyd Resin paint applied over a Grey undercoat. This Dark Blue is the house colour of William Hill the Bookmaker. This scheme was repeated twice.

• It is suggested that the modern alkyd resin paints are removed. The bulk of the overpaint may be simply peeled away using a palette knife. The remaining residue and traces of the dark finish and varnish may then be removed using solvents.
• Some areas of the existing dark finish should be retained for the archaeological record – perhaps some areas at one end of the Big Central Arch.
• The Brown/Black finish may then be recreated using modern stain/paints and varnishes.
• The colour of the finish applied to the shopfronts should be considered alongside the colours to be applied to the upper windows.