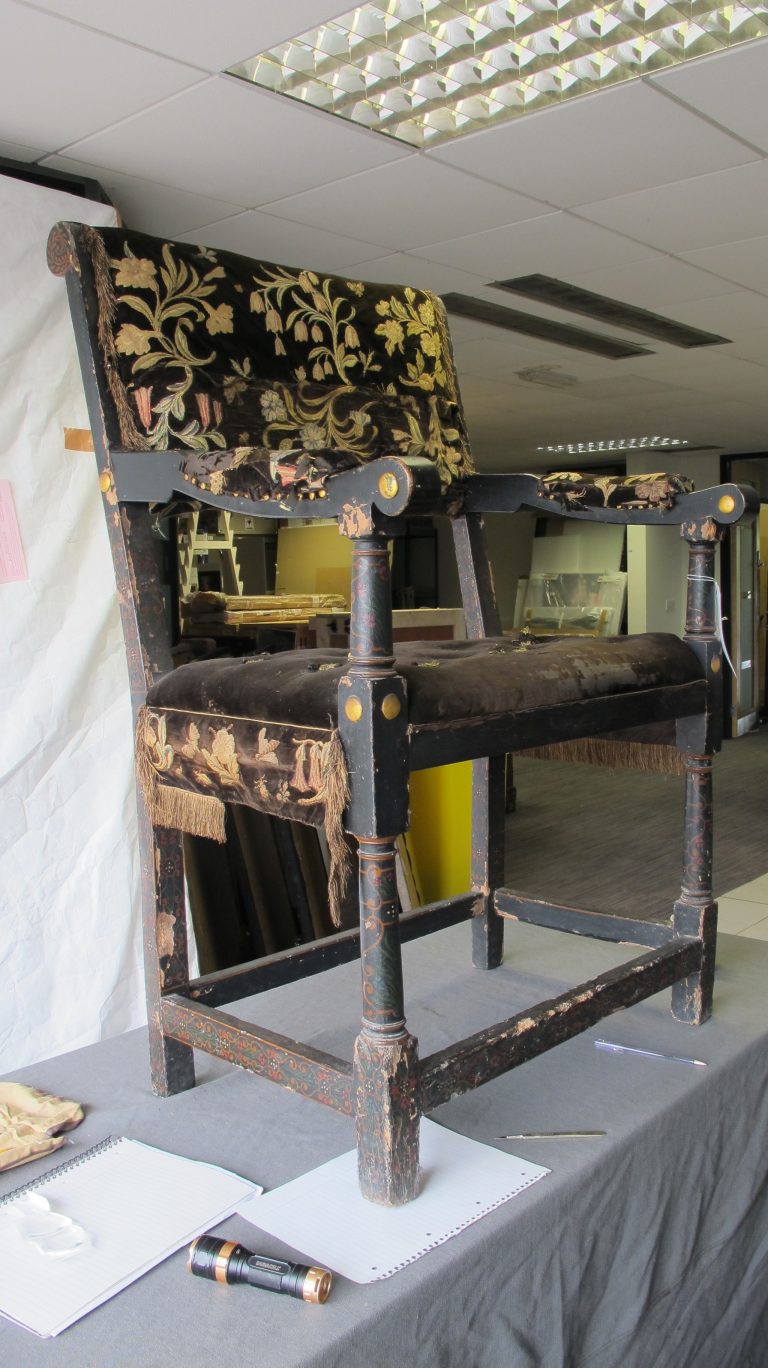 Substantial traces of an applied decorative finish have been observed on the wooden surfaces of the an early seventeenth-century upholstered oak chair. Paint analysis was commissioned to investigate these finishes with the aim of establishing the decorative history of the chair.
Condition – On-site examination
The scale and quality of the armchair suggests that it was designed to be a high status piece of furniture. It appears to retain most of it original wooden elements. The embroidered fabric on the seat back and arms, and that on the sides of the seat cushion may be original. The fabric on the seat cushion is thought to have been replaced. The material is worn and has clearly been refitted to the chair after the existing painted decoration was applied.
The chair is structurally sound with areas of small mechanical damages and surface loss due to wood worm infestation. The surfaces are covered with a light layer of dirt and dust.

Original Decoration
On-site examination of the chair and the analysis of removed samples suggests that the chair was originally painted in a black coal-based paint and possibly with areas of graining in imitation of a hardwood such as walnut. The use of a coal-based paint suggests a decorative scheme dating from the 17th century as the pigment coal was in common use at this period but fell out of use in the later 17th century. It is possible that the chair may have been further embellished with other applied colours, patterning of gilding, but such details were not discovered during the present investigation.

Existing Decoration
The existing decorative scheme – a strap-work style pattern applied over a black background – was applied over a layer of Light Buff filler and a Light Grey undercoat layer. The application of this secondary decoration would seem to be part of a major renovation of the chair carried out when the chair was already suffering from woodworm infestation and its surface and original applied decoration was worn and abraded. The upholstery was probably in need of repair.
The surface of the chair was carefully prepared at this time with the application of several coats of a light buff filler. The chair was then painted in a light grey undercoat. The black background finish coat was applied over a black undercoat layer. Various shades of a deep orange/yellow paint were used for the applied pattern, decoration of the mouldings and the edging detailing.
The style of the patterning suggests an awareness of Jacobean strapwork patterns. The pattern has been applied freehand in an assured manner. The pigmentation paint is quite coarse – suggesting perhaps an 18th or 19th century application rather than a 20th century application.

Later Minor Retouching
There is evidence to suggest (Sample 12) some minor retouching or localised repairs applied at a later date. A brown coloured decoration was applied over the existing black scheme. It is possible that the brightly coloured flowers and highlights in blue, green, red and white were added at this date. These details are very bright and in places appear to overlie the varnish layers.