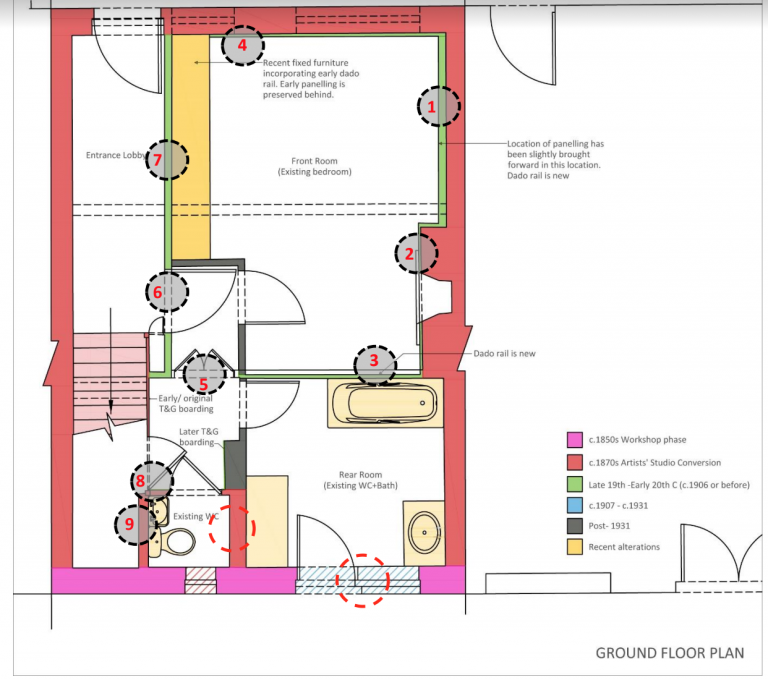 The Studios are in a mews type configuration in a building which was originally a workshop and foundry (Landseer’s Lions were for Trafalgar Square were cast there). Later in the 1870s, the workshop was divided into the existing configuration of small artists’ studios.

Research is required to establish the build sequence of the existing panelling in Studio 3A. A set of samples were to be removed from the early joinery on the large studio on the 1st floor dado which appears to have undergone very little alteration – apart from the obvious insertion on a modern kitchen and storage cupboards. These samples (locations specified by the architect) would be compared with a series of samples removed from the ground rooms (Entrance Lobby, Front Room, W.C. and Bathroom)

• When the Studio was first fitted out the door to the Front room, panelling in the Entrance Hall, Door to First Floor space and the high dado were painted in a Dark Red Brown.
• These elements were then repainted in a further Dark Red Brown and the panelling in the Front Room and the high dado ion the First Floor was decorated in a Deep Green.
• Later all of these elements were painted in a Mid-Green – excepted the high dado which was painted in a Cream.
• Later – probably during the Pre-WW period the rooms were decorated in a series of Yellow schemes.
• It is probable that during WWII and until the 1960s the rooms were not painted.
• The First-Floor studio was repeatedly decorated during the 1960s – 1980s period but the Ground Floor front room was neglected – possibly used only for storage.
• During the 1980s – or when ever the kitchen units were fitted the interiors were given a major renovation. This involved the stripping out and complete renewal of the Bathroom and Toilet – no trace of the earlier fabric remains. The existing panelling in the Front room was moved forward and new cupboards and partitions were installed. Some making good and repairs to the historic panelling were carried out in new softwood and fibreboard.